Skip to Main Content
It looks like you're using Internet Explorer 11 or older. This website works best with modern browsers such as the latest versions of Chrome, Firefox, Safari, and Edge. If you continue with this browser, you may see unexpected results.

The University Libraries and the Chicanx Latinx Staff and Faculty Association (CLSFA) are proud to showcase the following resources highlighting scholarly and creative work by various Chicanx/Latinx authors, directors, scholars and other creators that celebrate Hispanic and Latino/a/x Americans that we are inspired by.

Consider making a recommendation by filling out this form. 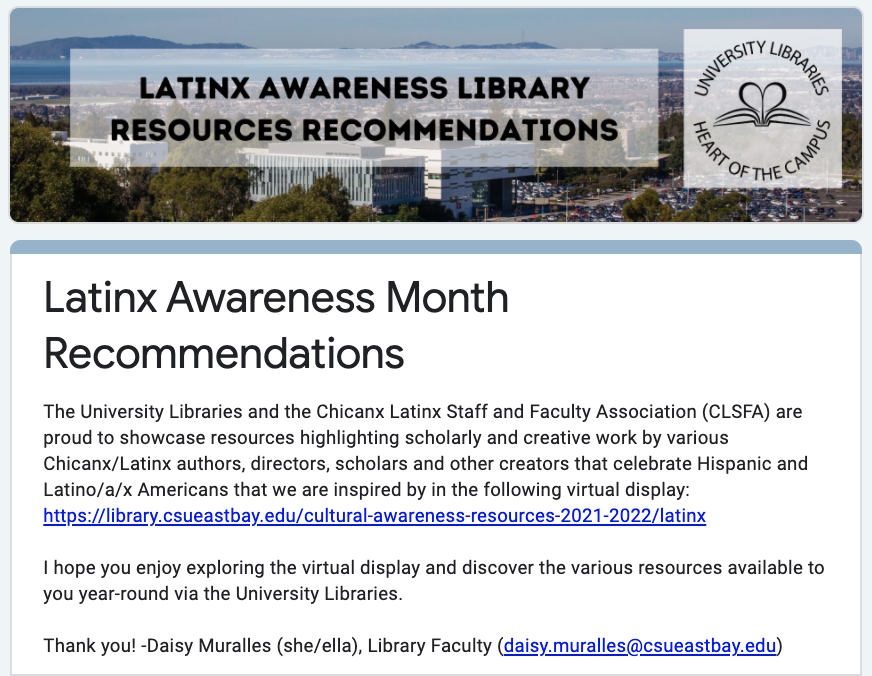 A Selection of Physical Library Resources

The distance between us : a memoir (book)

Description from book jacket, "When Reyna Grande's father leaves his wife and three children behind in a village in Mexico to make the dangerous trek across the border to the United States, he promises he will soon return from "El Otro Lado" (The Other Side) with enough money to build them a dream house where they can all live together. His promises become harder to believe as months turn into years..."

Description from website, "Café con Chisme is a Latinx podcast created and hosted by siblings Yaz + Seb. We see chisme as a tool and practice for social justice—inspired by the mujeres and femmes who raised us and taught us how to be fierce, tell a good story, and speak truth to power—all with a little laughter. Join us as we take on cultural critiques of race, politics, and pop culture—to imagine new possibilities and more just worlds." 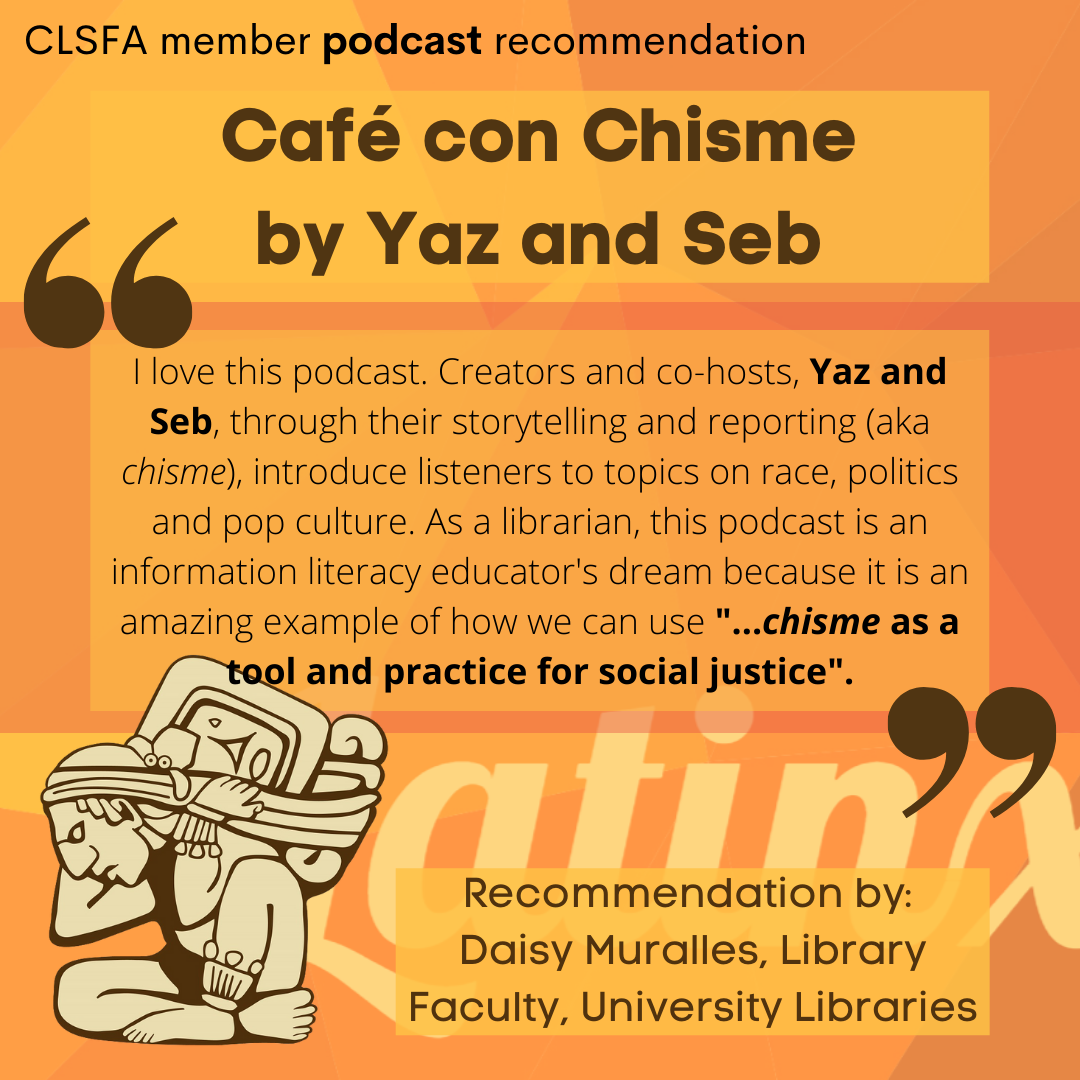 For Brown Girls with Sharp Edges and Tender Hearts: A love letter to Women of Color (book)

Description from publisher's site, "For generations, Brown girls have had to push against powerful forces of sexism, racism, and classism, often feeling alone in the struggle. By founding Latina Rebels, Prisca Dorcas Mojica Rodríguez has created a community to help women fight together. In For Brown Girls with Sharp Edges and Tender Hearts, she offers wisdom and a liberating path forward for all women of color..." 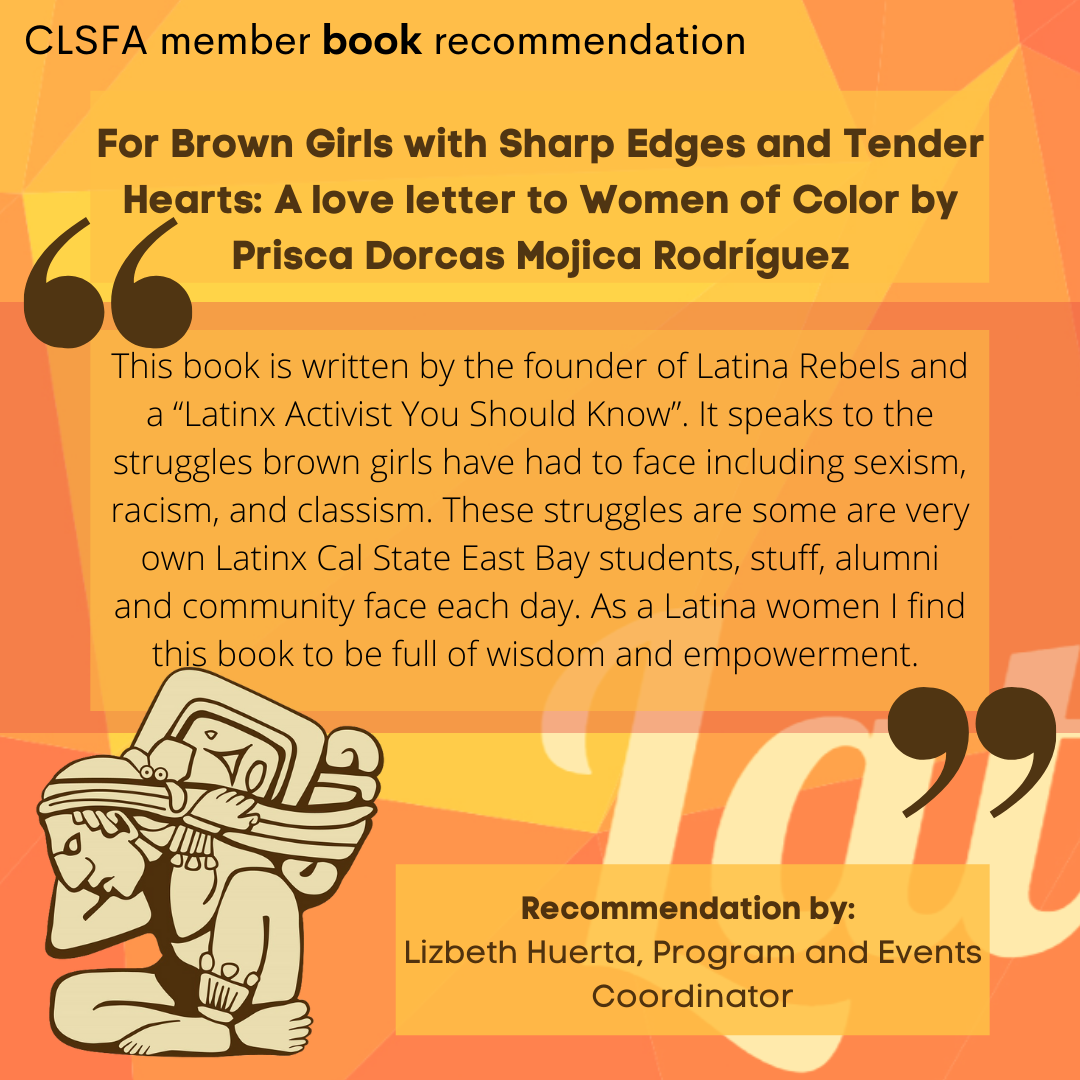 Inner Borderlines: Visions of American Through the Eyes of Alejandro Morales

Description from Films on Demand, "In April 2013, Spanish film maker Luis Mancha went to the University of California, Irvine to interview Alejandro Morales, an under-read Chicano author whose works present a vision of Southern California and America so different from the image that the United States projects abroad that Mancha felt compelled to make this documentary film. In it we follow Morales’ journey around Southern California as he tries to understand issues concerning the Latino population in California and the U.S. He and other Chicano/Latino academic experts discuss the first immigrants to California..." 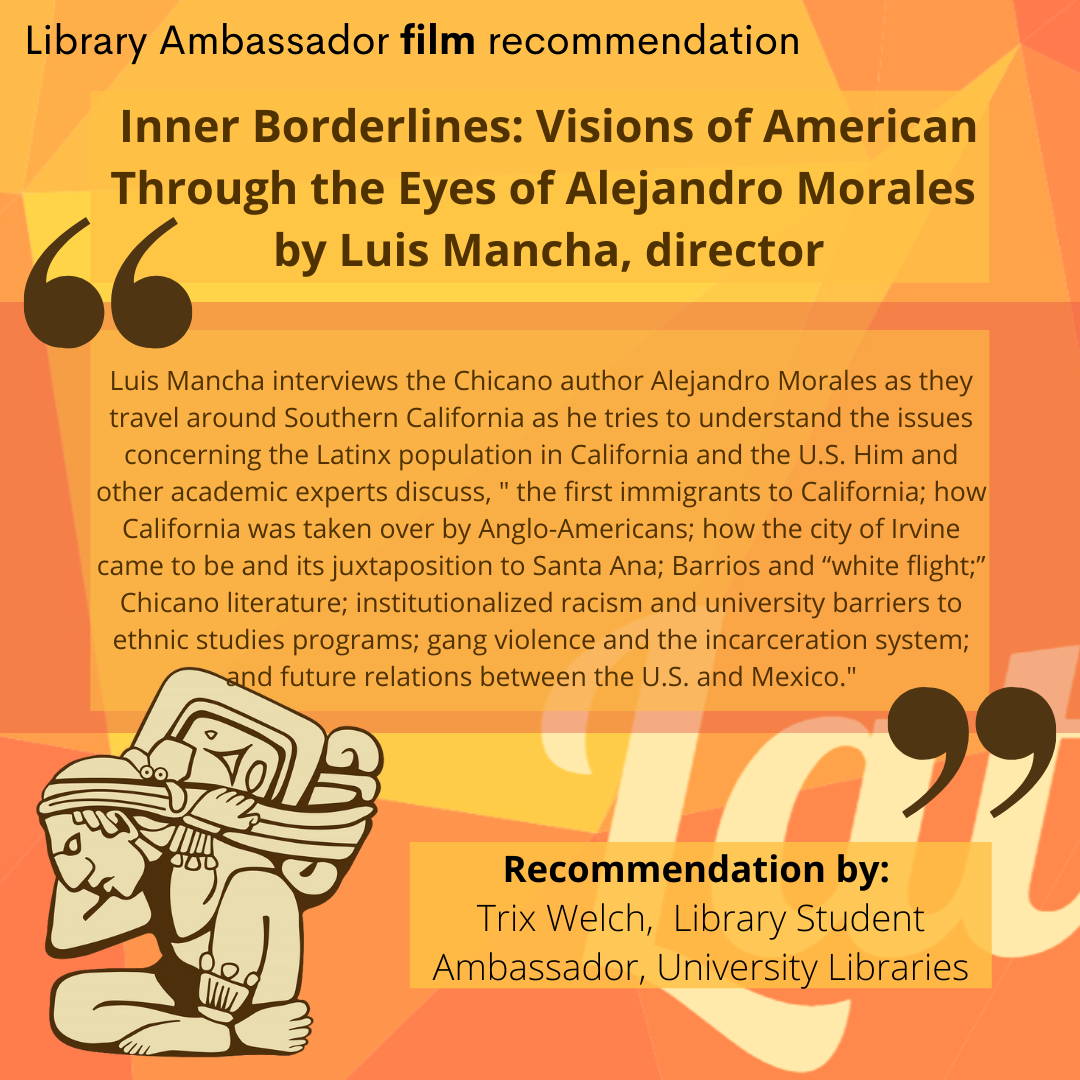 Description from Kanopy, "Precious Knowledge reports from the frontlines of one of the most contentious battles in public education in recent memory, the fight over Mexican American studies programs in Arizona public schools. The film interweaves the stories of several students enrolled in the Mexican American Studies Program at Tucson High School with interviews with teachers, parents, school officials, and the lawmakers who wish to outlaw the classes...." 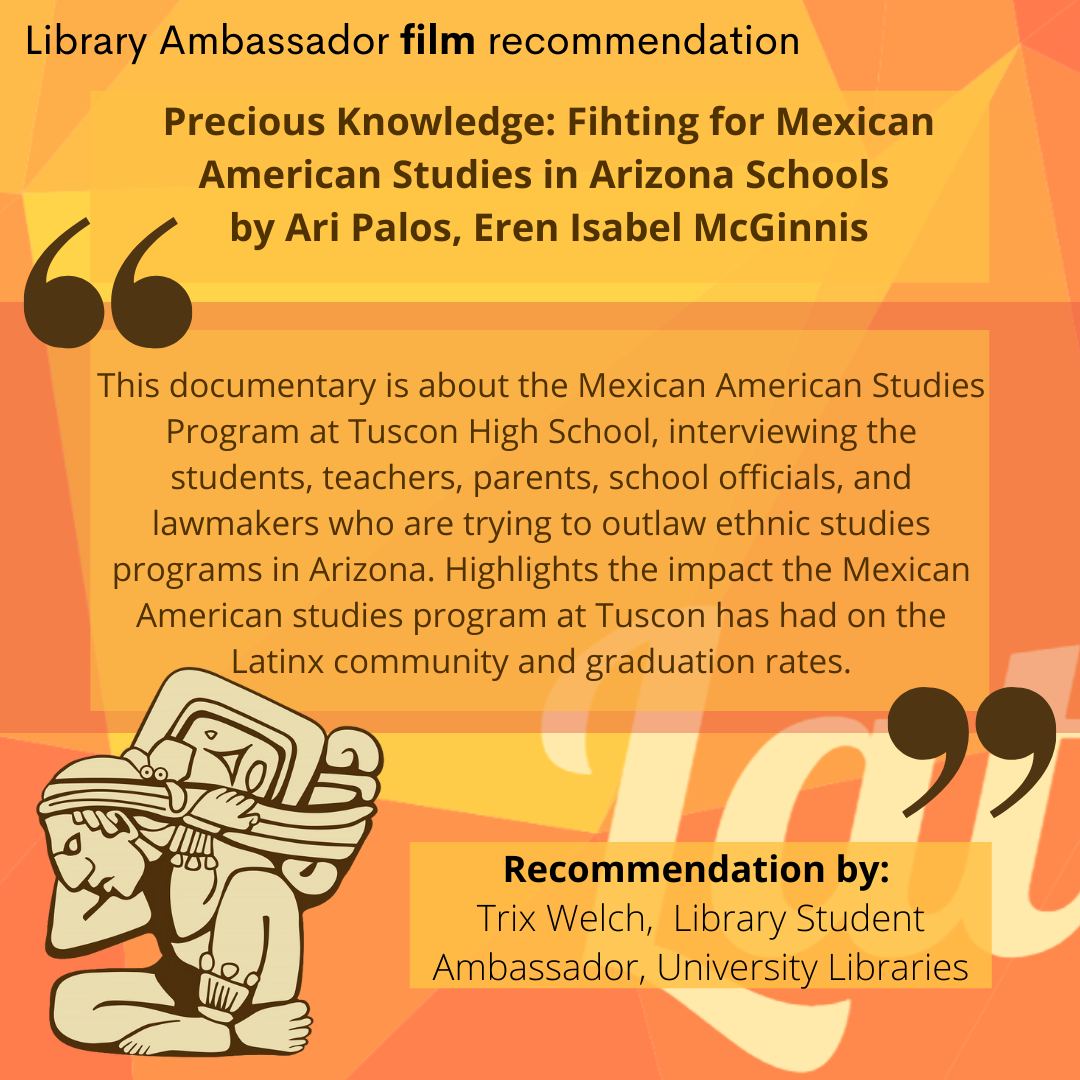 From BaySync post, "Saludos! To celebrate Latinx/Hisapnic Heritage Month, GANAS and Student Equity and Success Programs invites the campus community to visit our walk through exhibit located on the second floor of the Student and Faculty Support Building. Come learn about some of the most influential Latinx figures and immerse into this month's celebration. Exhibit will be on display September 15 to October 15. We look forward to your visit! 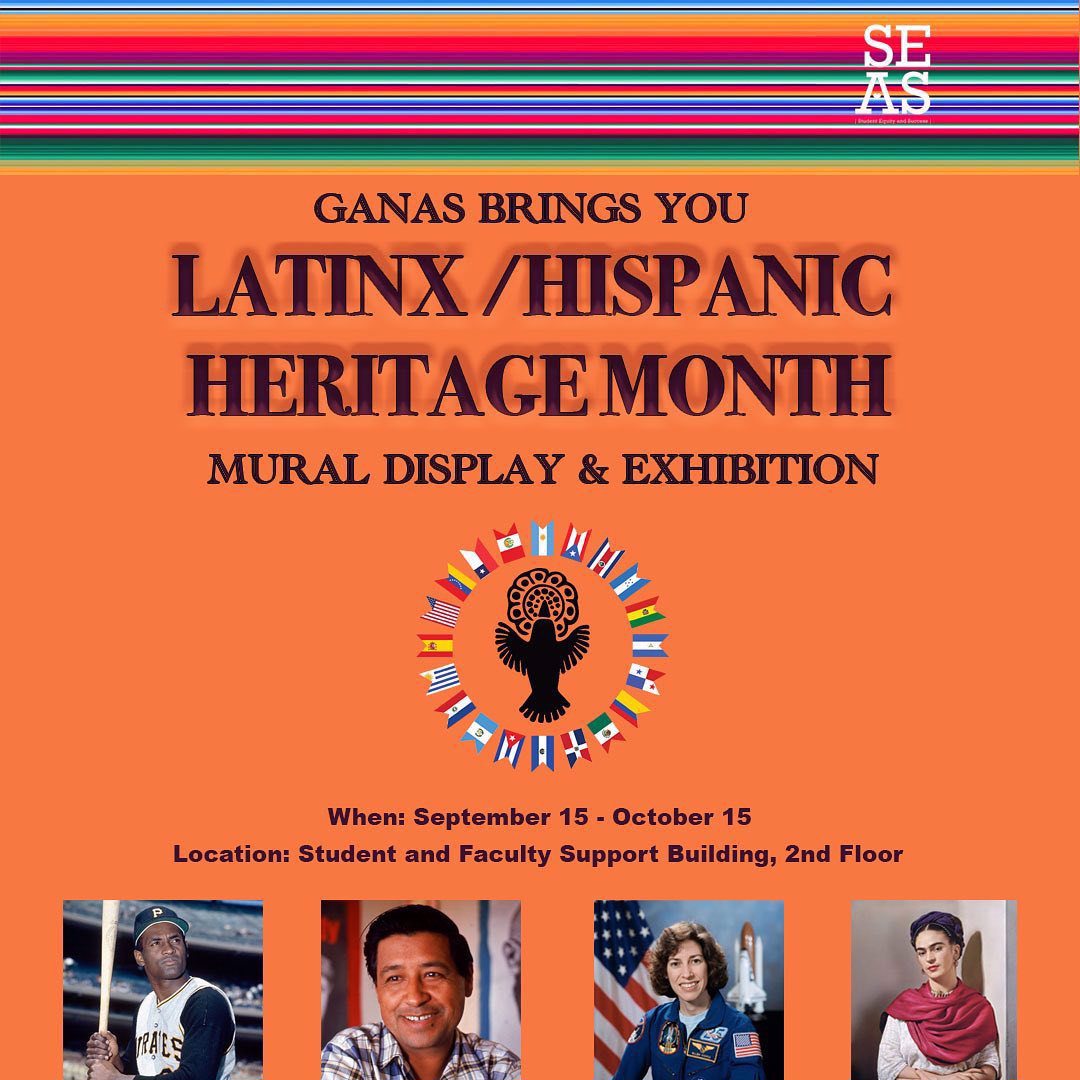