Exhibit showcasing Hayward's role as one of the main evacuation points from which American citizens were sent to relocation camps in World War II.

After the bombing of Pearl Harbor by Japan in December 1941, racially fueled anti-Japanese sentiment was rampant in the Western United States – especially in California.

While the larger story of the U.S. government’s response -  “relocating” (essentially, imprisoning) 100,000 of its own American citizens of Japanese descent in remote camps throughout the country is fairly well known - it is less well known that a large number of those relocated were “collected” in downtown Hayward in May of 1942.

In fact, many of the most famous images that represent the start of relocation process were shot near the corner of C and Watkins street, near the present-day Hayward Public Library.

During Asian-Pacific Heritage Month, the CSUEB Library commemorates the 70th anniversary of this shameful episode with a large poster and cabinet display of artifacts on the Upper Mall, near the elevators.

Full Text for This Exhibit

[Images of Japanese-American families with their luggage and name tags hung around their necks, standing around waiting for buses to take them to "relocation" camps]

Please note that the text on this page comprises that of the entire exhibit where available.

There may be additional information on other pages within this exhibit's Guide that expands on the production, as well.

Together, the text from these two sources comprise all the information covering this topic.

You may recognize many of the iconic historical images of the Relocation by famed photographer Dorothea Lange.

Historically regarded as one of America's best documentary photographers, Lange was already famous by the entry of the U.S. into World War II in December 1941.

By early 1942, she began documenting the forcible relocation of Japanese-American citizens from their homes and livelihoods with such a powerfully critical photographic portrayal, that the Army stepped in and confiscated her work. 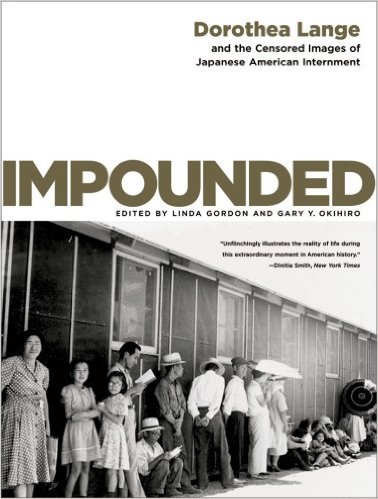 A recent book, Impounded: Dorothea Lange and the Censored Images of Japanese American Internment, treats this censorship in great detail, and presents 119 images originally impounded by the Army.

Wall Poster for This Exhibit

Copyright 2012 by the CSUEB University Libraries