A major Library exhibit that ran between September 2013 and March 2014, highlighting the papers of Henry H. Hart within the Special Collections of the University Libraries.

The Collections of Explorer, Scholar, and Anthropologist Henry H. Hart Are Housed in the CSUEB Library!

Hart's collection of materials from his life and travels provide a fascinating glimpse into another time.

This working research collection of history scholar Dr. Henry Hart, includes a montage of personal letters written by Robert Browning and Elizabeth Barrett Browning, H.L. Mencken, and A.E. Housman, as well as many of Hart's own published writings.

Hart’s interests ranged widely and deep: subsets of his collection are the Marco Polo and Pacific Exploration components, including a hand-illustrated and autographed 1655 Atlas of China, compiled by Jesuit missionaries.

The exhibit also includes images of physical items gathered during his travels. These include early-20th-century postcards from China and Japan, an exquisite collection  of color-tinted glass lantern slides, and much more!

Among the materials that comprise the Henry H. Hart Collection at CSUEB, are numerous published works by Hart. During the course of his travels and research, Hart wrote a great deal, and many drafts of his books, lecture notes, newspaper clippings, and personal and legal documents have thus found their way into the Hart Collection here at CSUEB.

Use the tabs at the top of this page to learn more about Dr. Hart. You may even wish to make an appointment to view his collections first-hand!

Wall Posters for this Exhibit 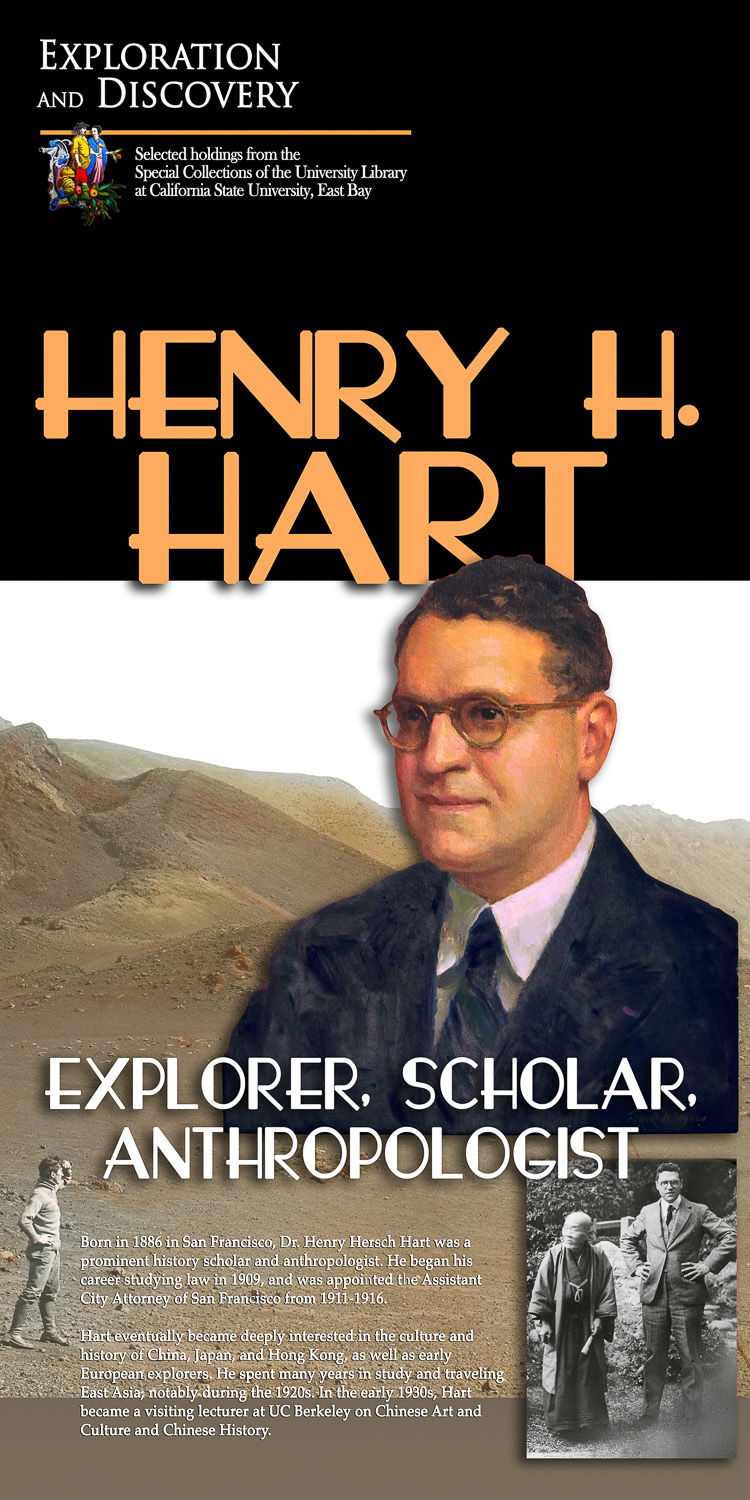 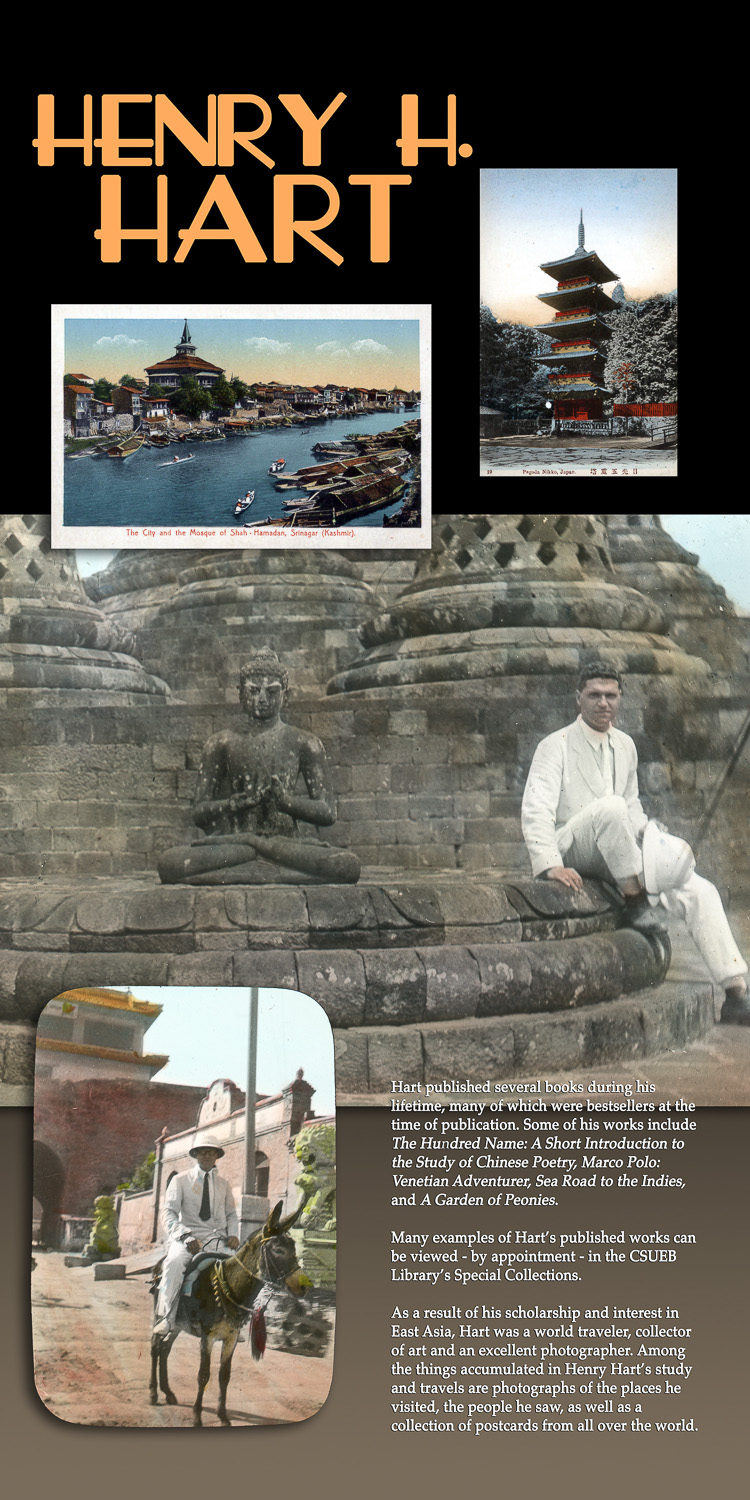 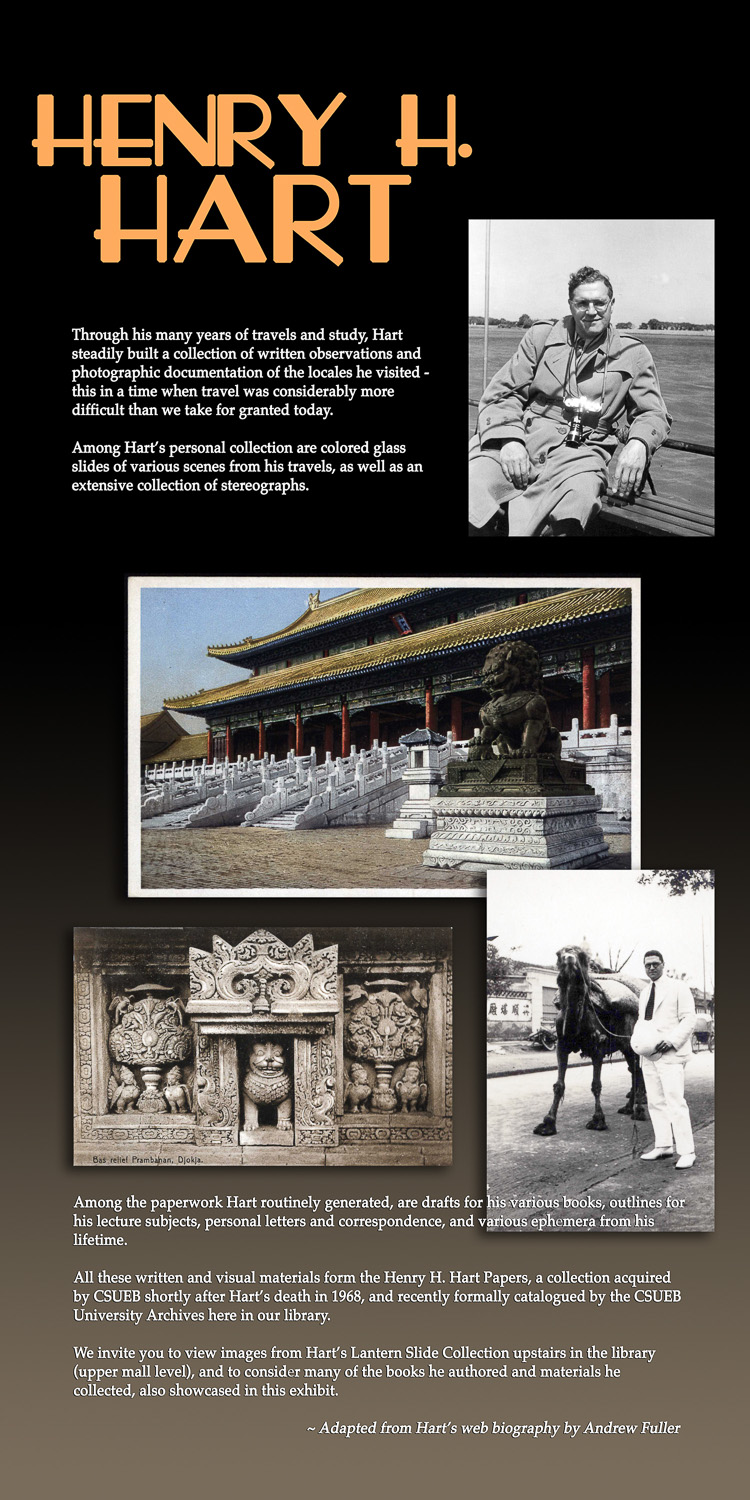 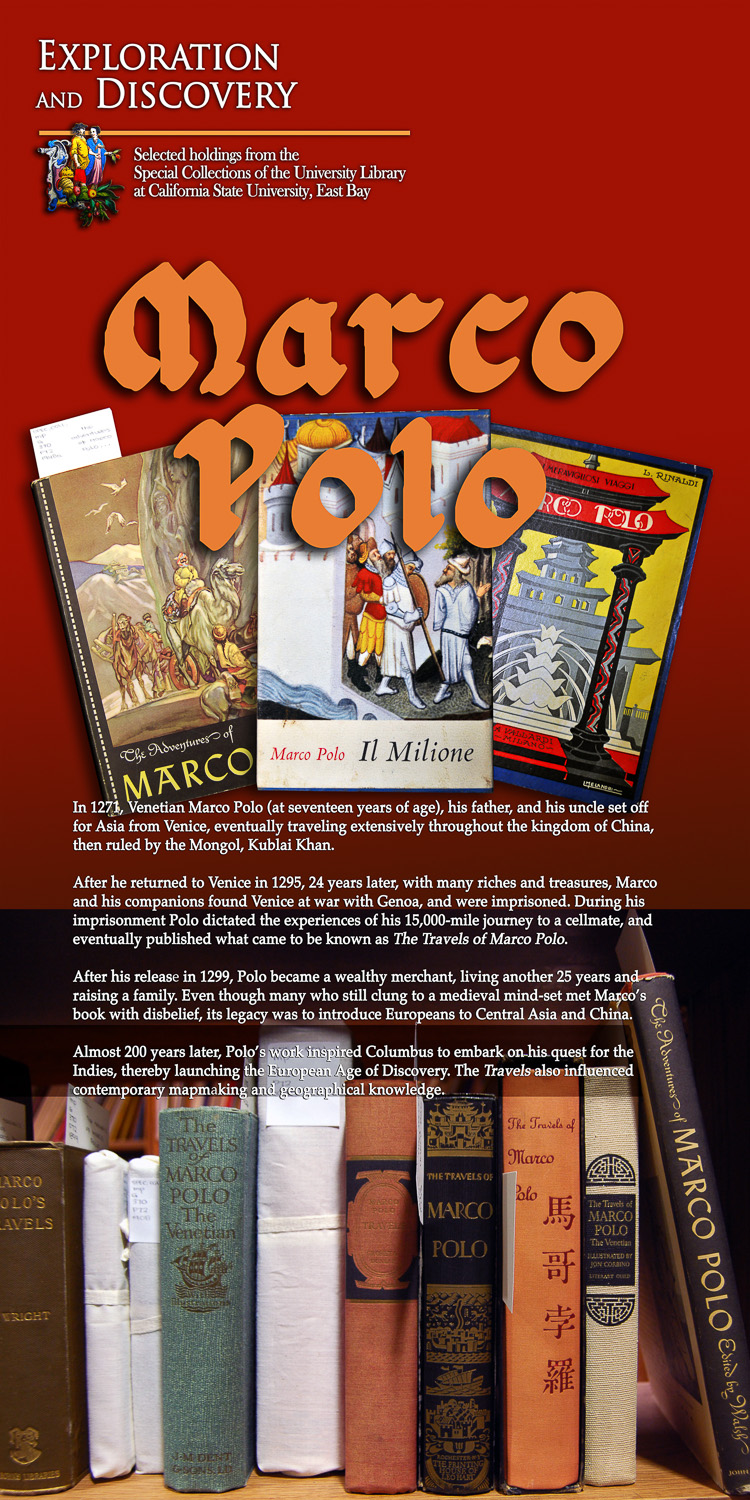 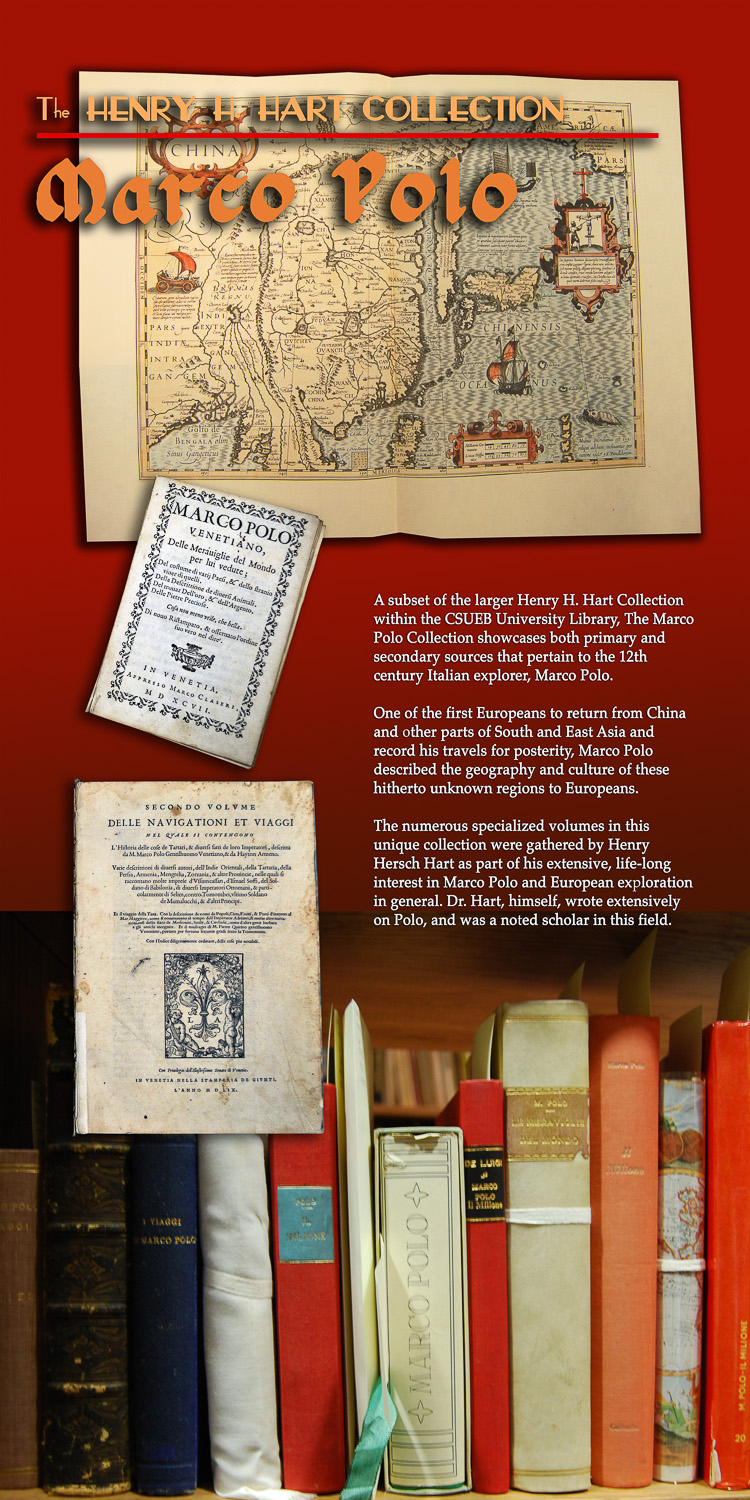 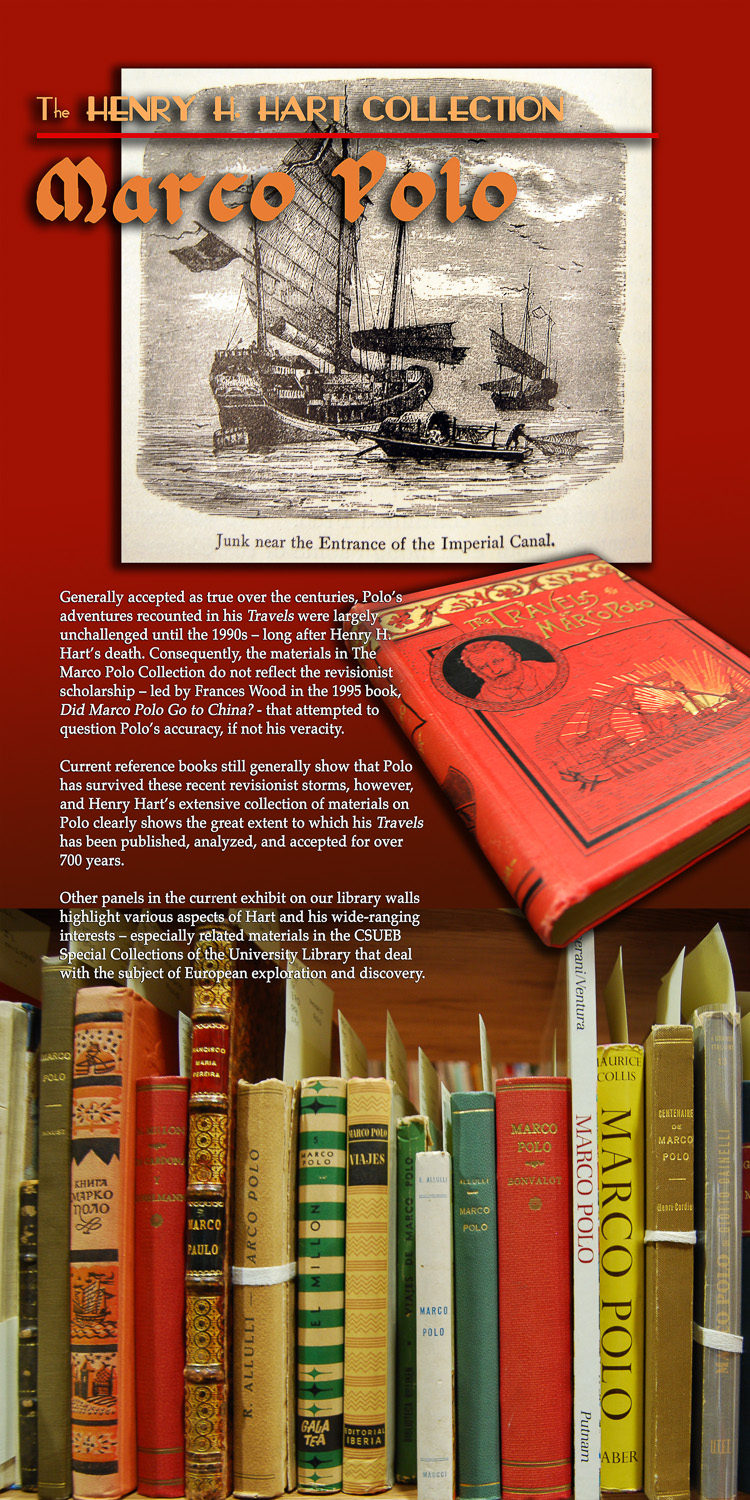 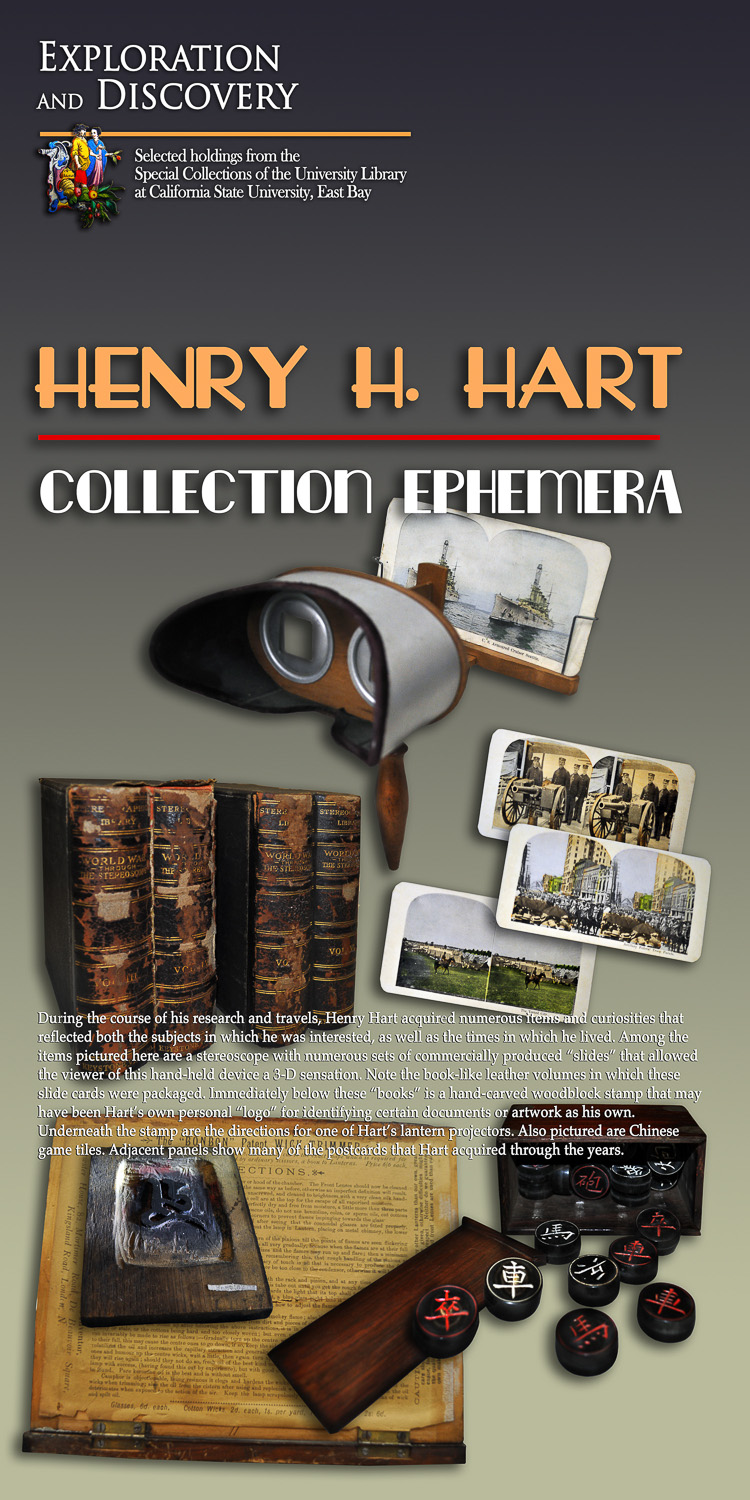 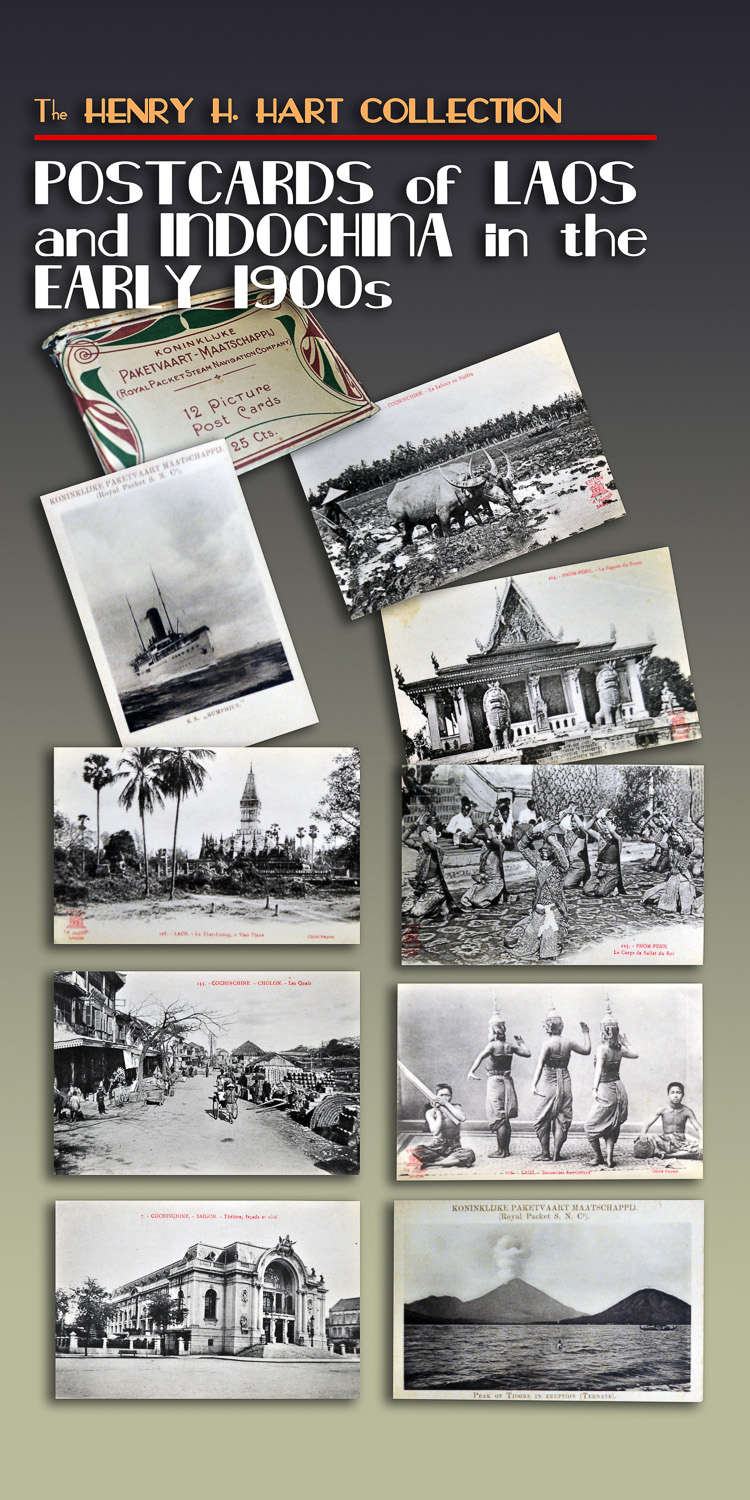 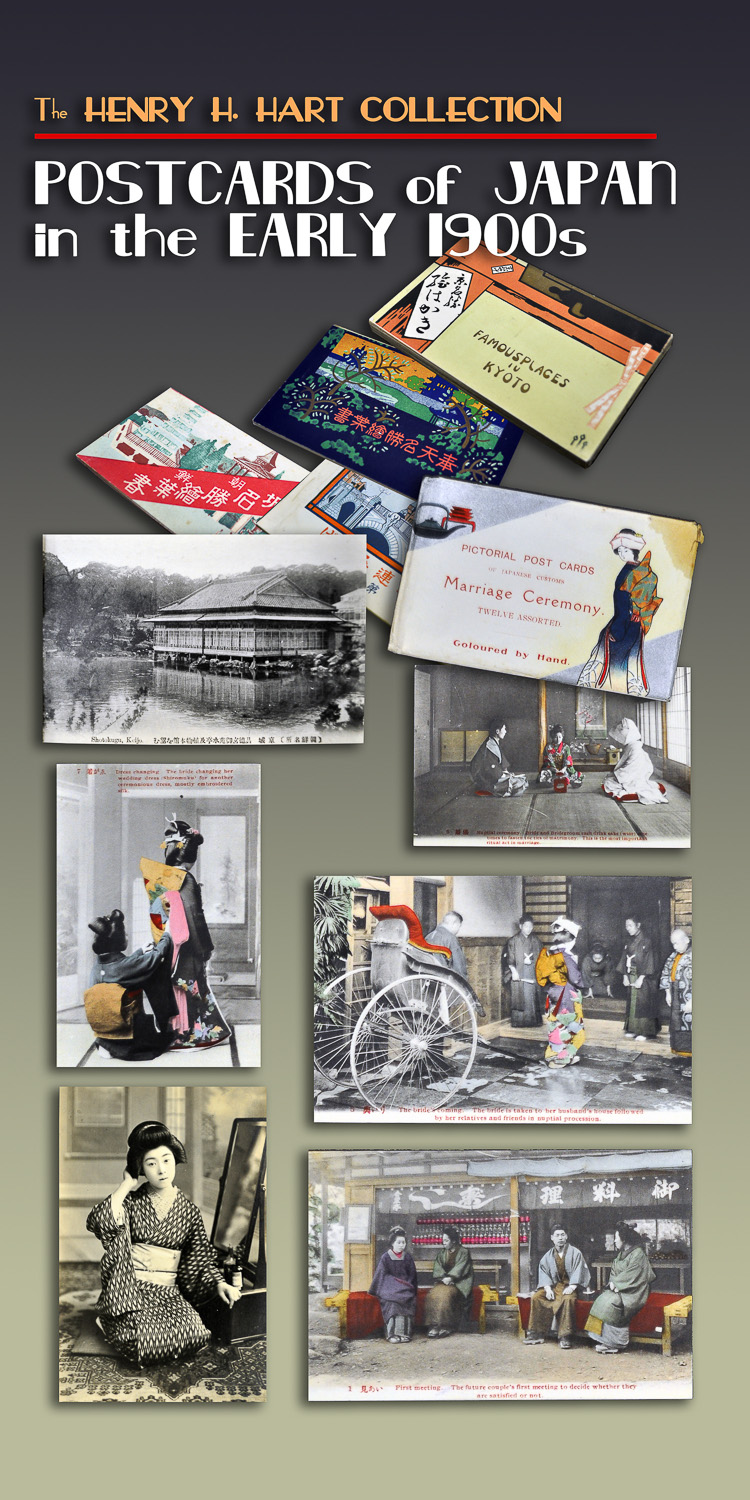 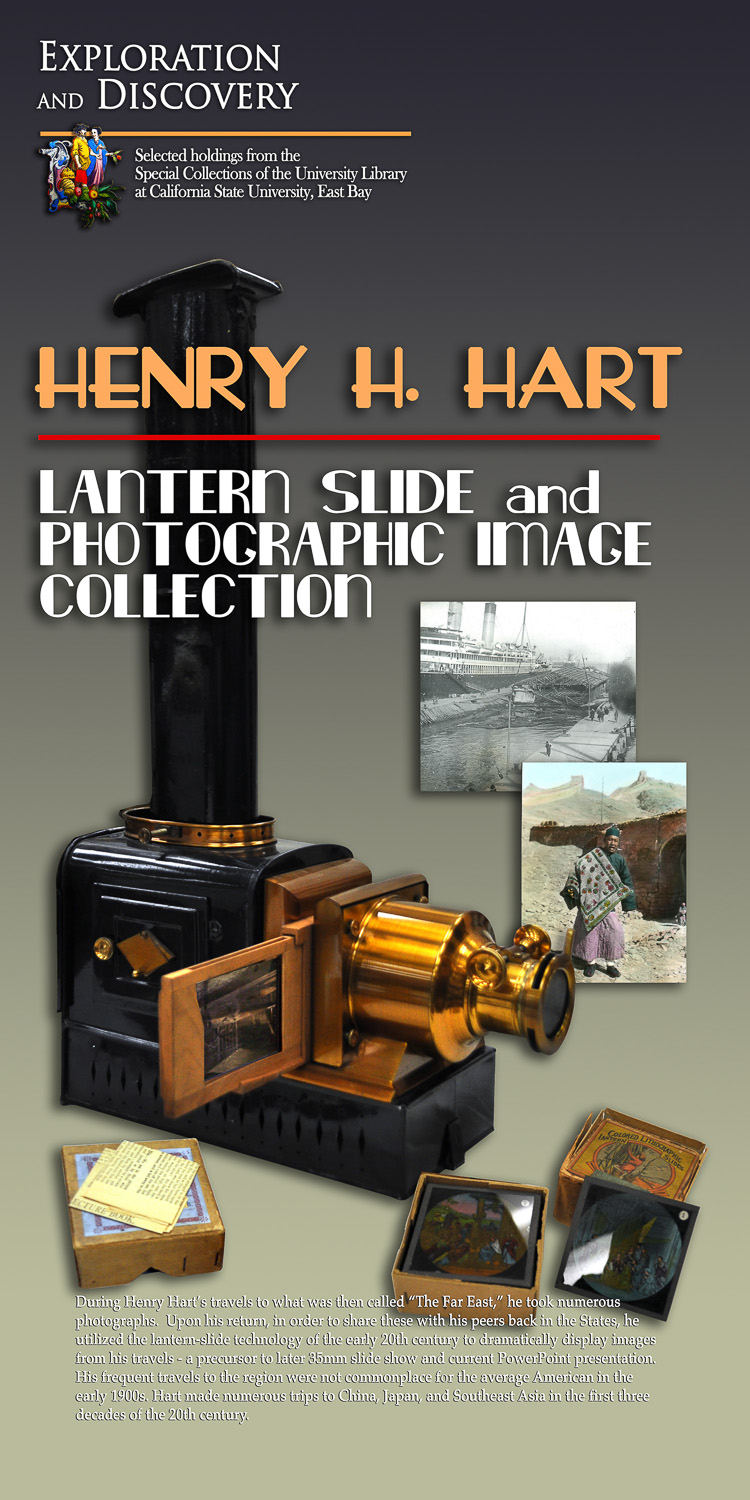 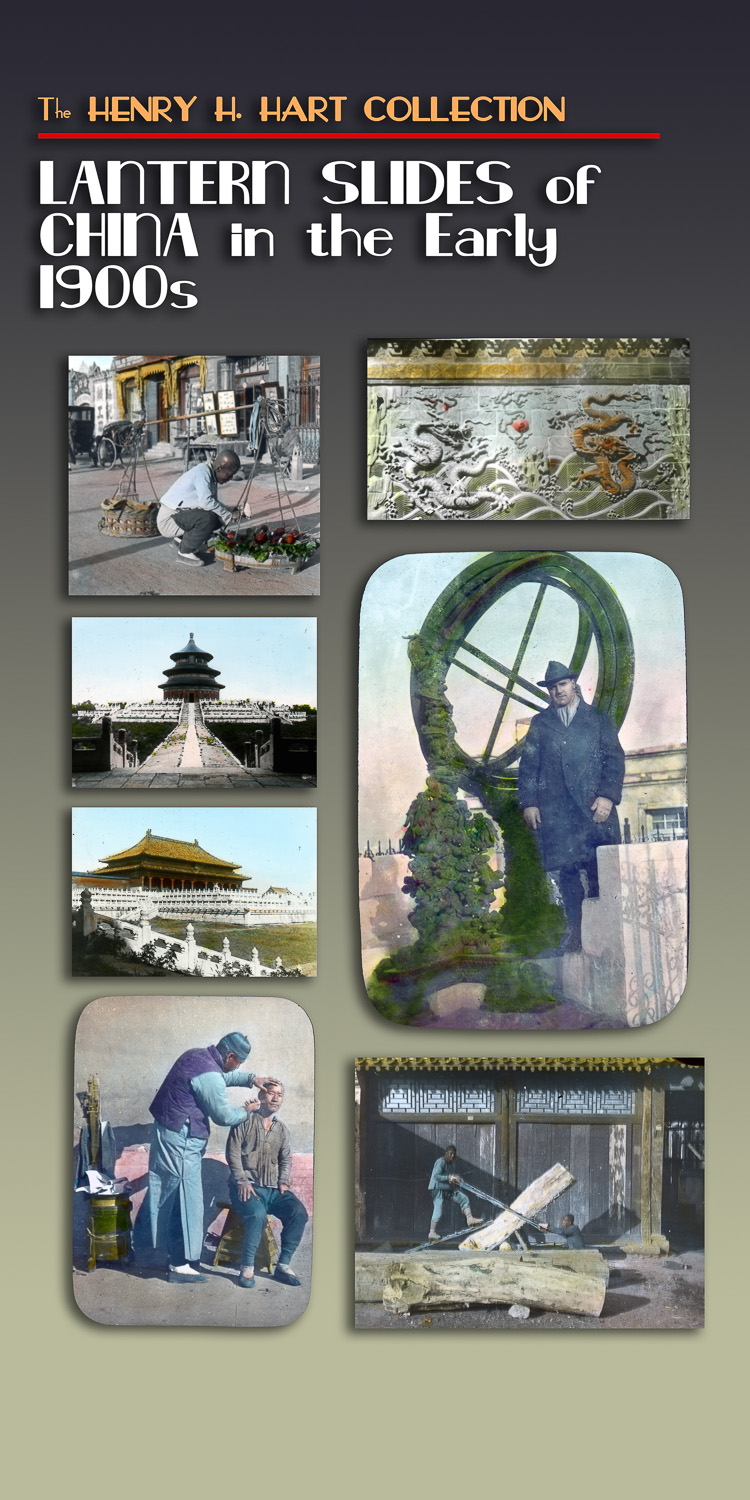 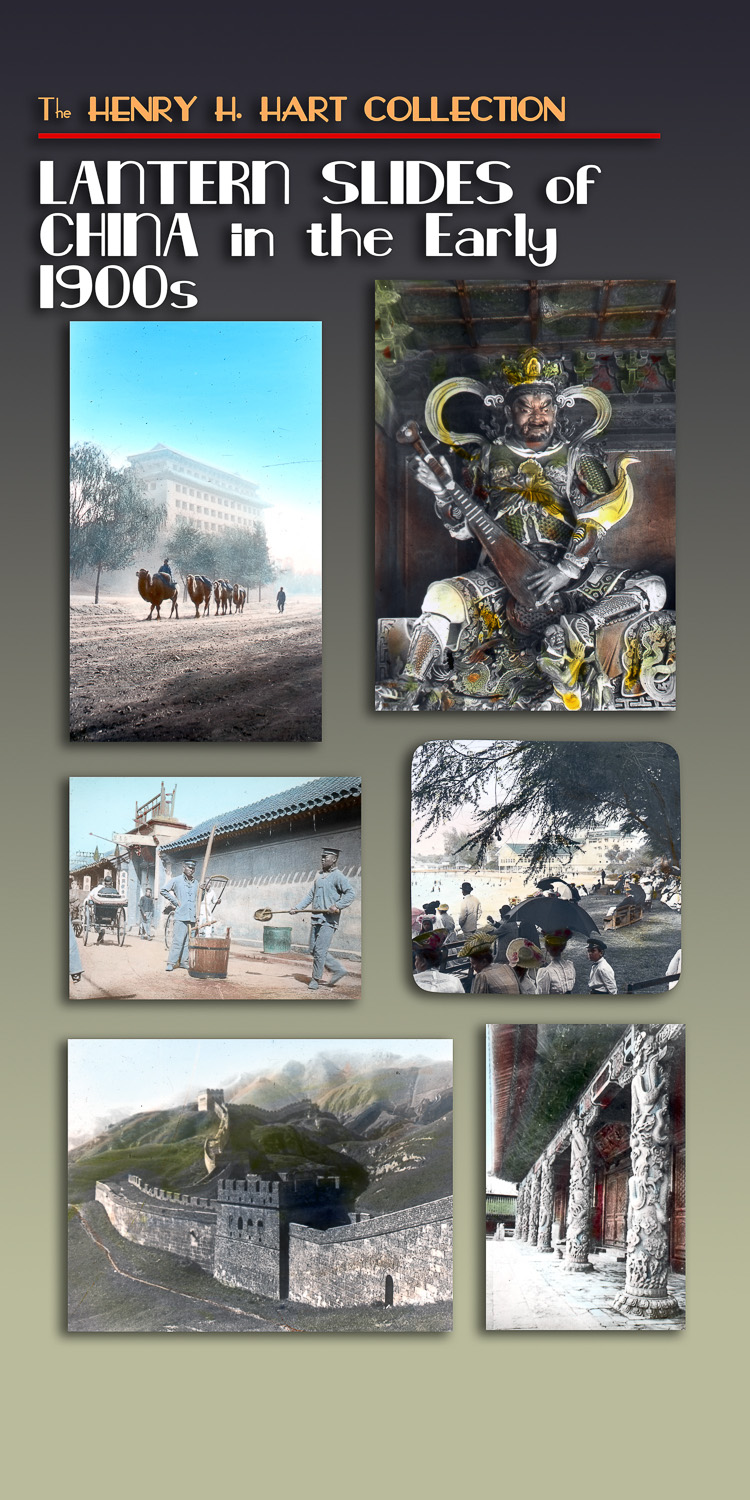 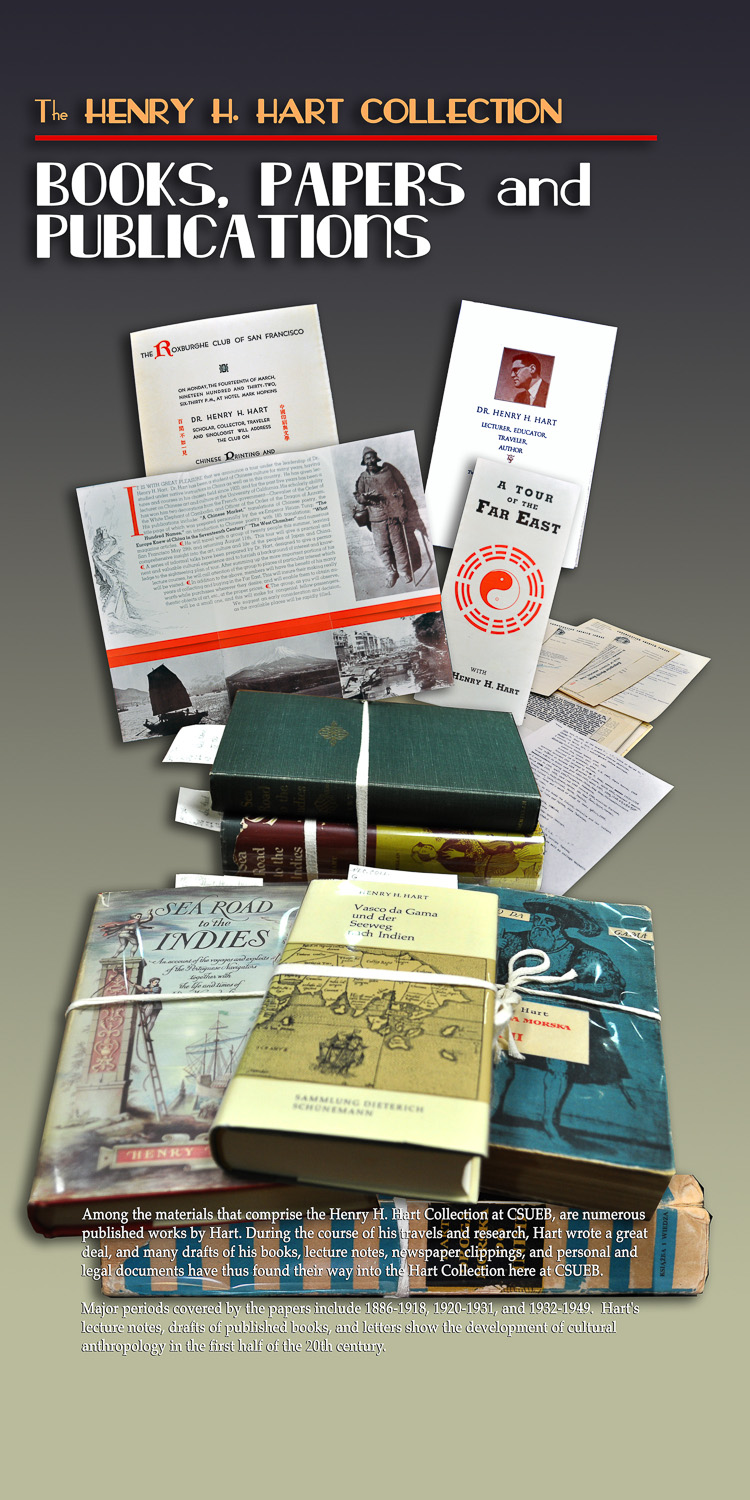 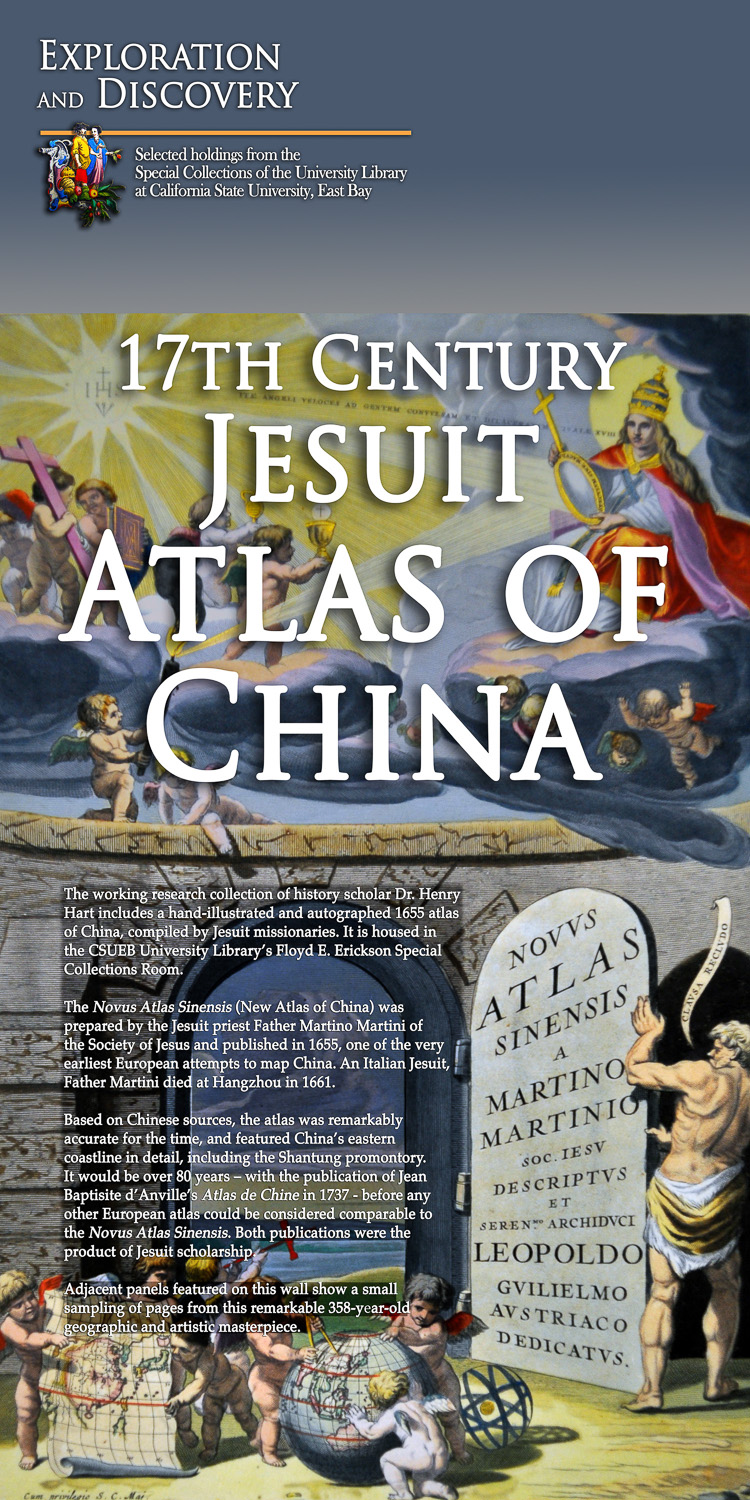 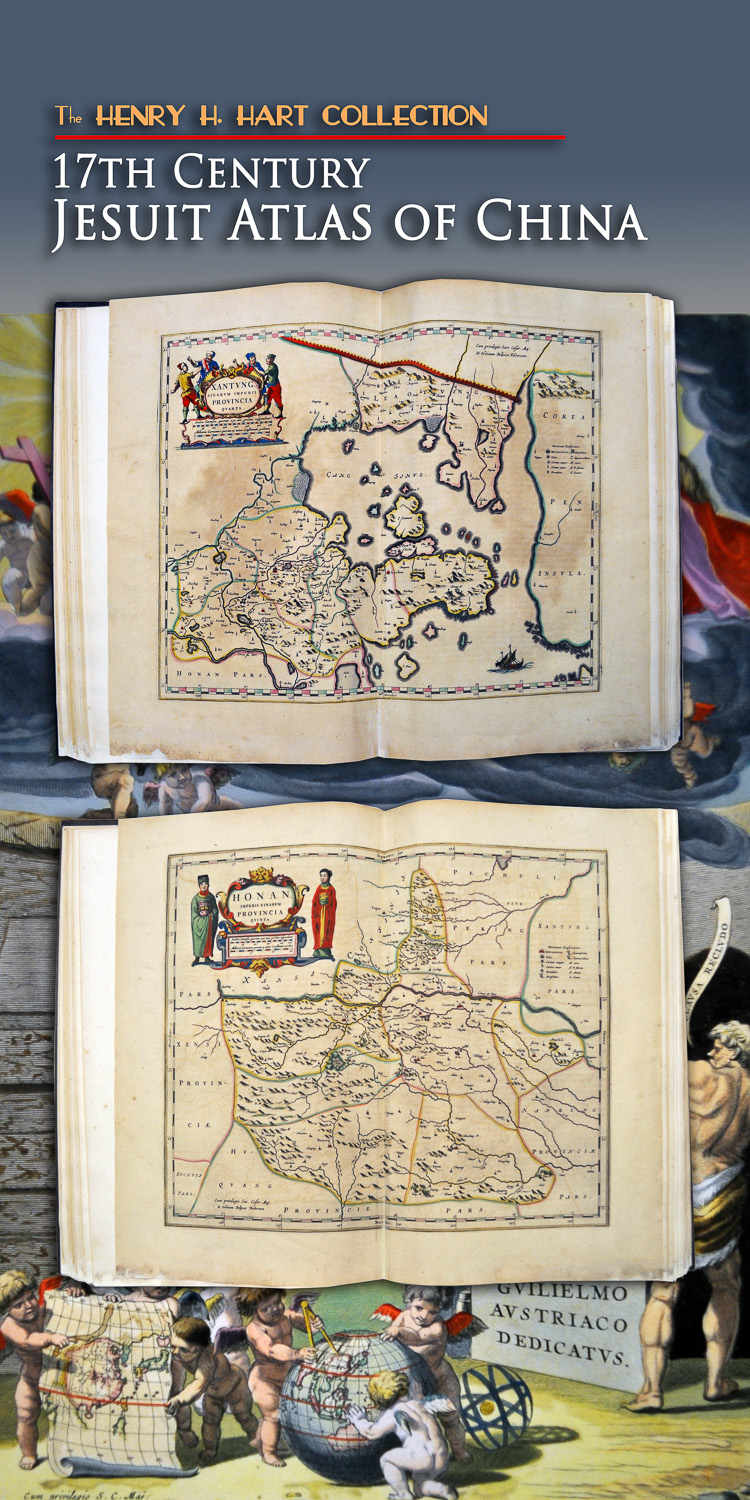 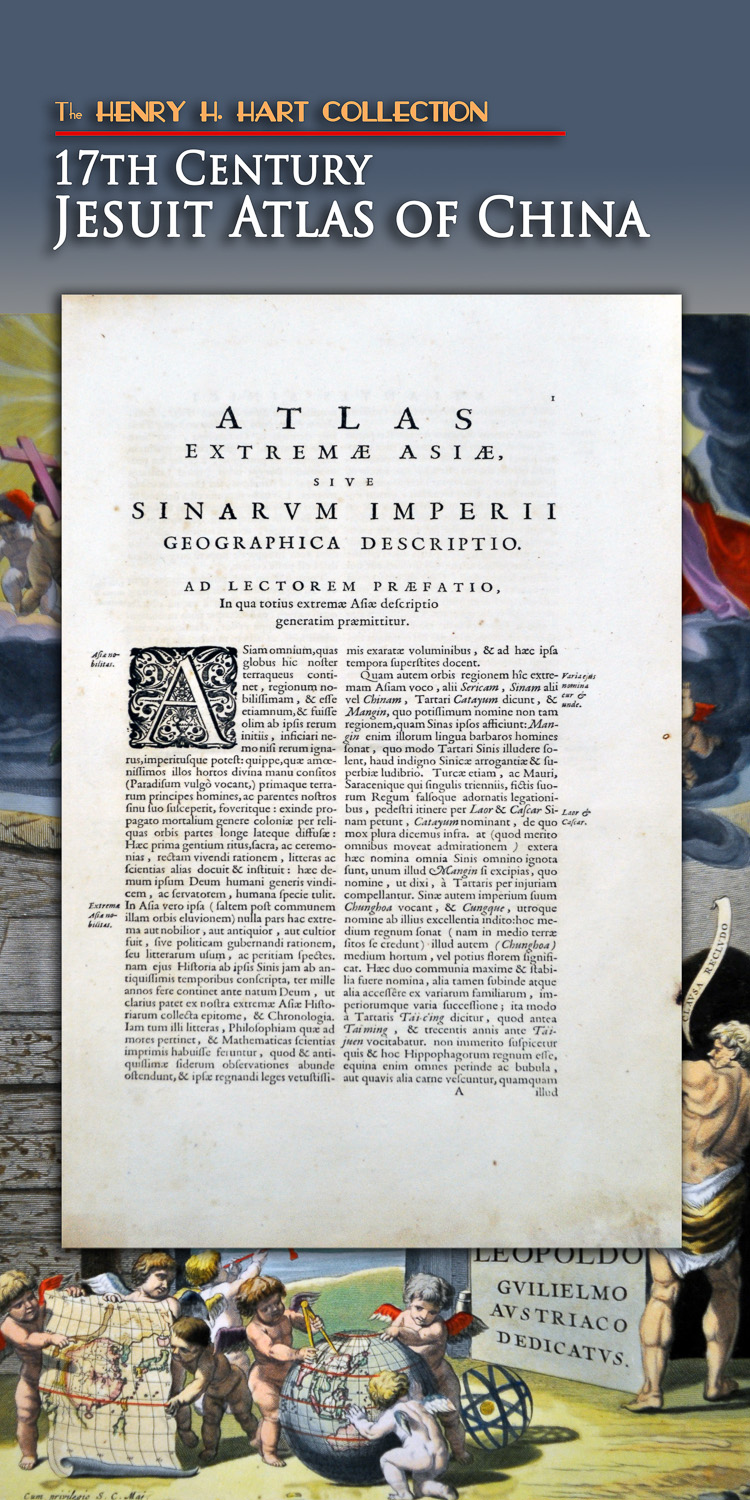 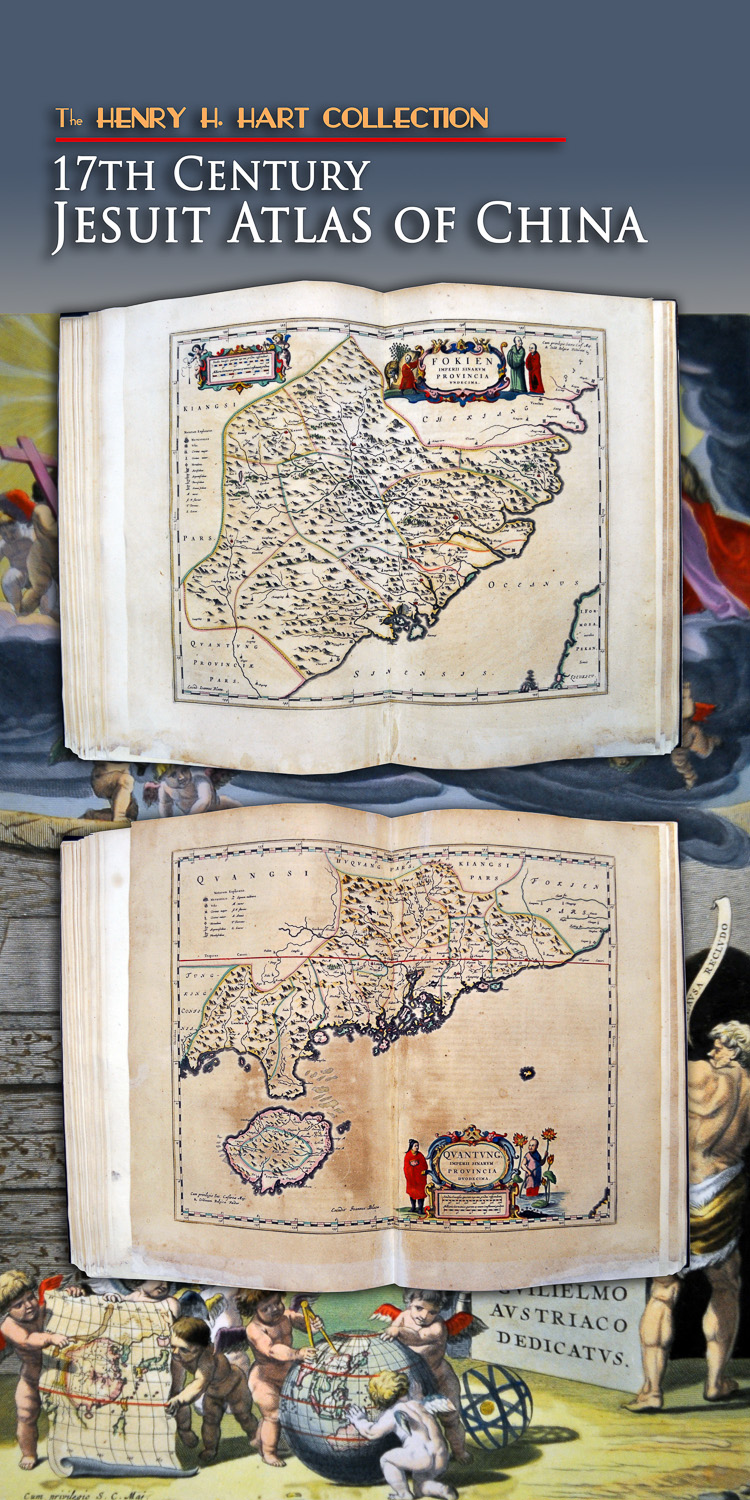 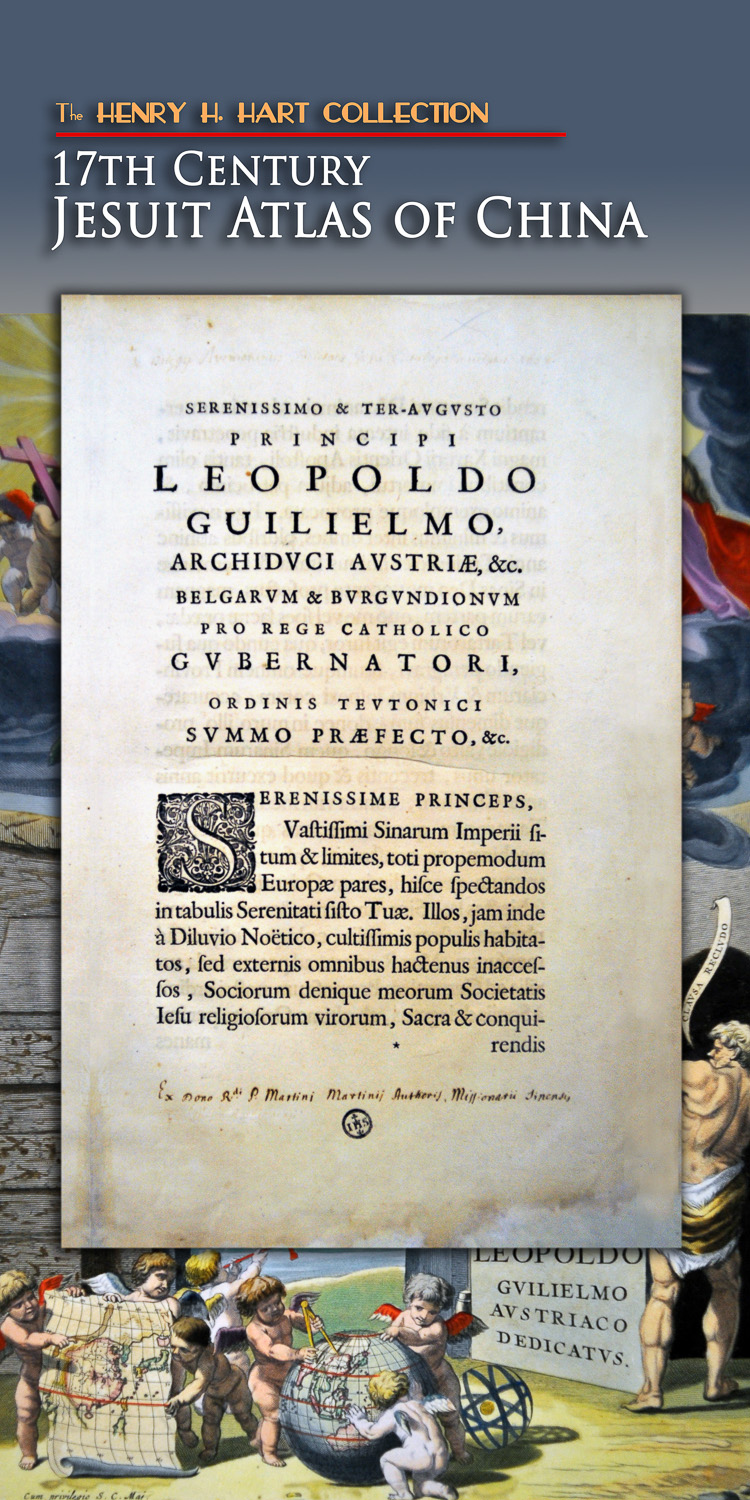 Who Was Henry H. Hart?

Born in 1886 in San Francisco, Dr. Henry Hersch Hart was a prominent history scholar and anthropologist. He began his career studying law in 1909, and was appointed the Assistant City Attorney of San Francisco from 1911-1916. He would eventually become deeply interested in the culture and history of China, Japan, and Hong Kong, as well as early European explorers. Hart would become a visiting lecturer at UC Berkeley on Chinese Art and Culture and Chinese History.

Full Text of This Exhibit

Welcome to Exploration and Discovery

An exhibit featuring selected holdings from

The Henry H. Hart Collection of the

Hart published several books during his lifetime, many of which were bestsellers at the time of publication. Some of his works include The Hundred Name: A Short Introduction to the Study of Chinese Poetry, Marco Polo: Venetian Adventurer, Sea Road to the Indies, and A Garden of Peonies.

Many examples of Hart’s published works can be viewed - by appointment - in the CSUEB Library’s Special Collections.

As a result of his scholarship and interest in East Asia, Hart was a world traveler, collector of art and an excellent photographer. Among the things accumulated in Henry Hart’s study and travels are photographs of the places he visited, the people he saw, as well as a collection of postcards from all over the world.

Born in 1886 in San Francisco, Dr. Henry Hersch Hart was a prominent history scholar and anthropologist. He began his career studying law in 1909, and was appointed the Assistant City Attorney of San Francisco from 1911-1916.

Hart eventually became deeply interested in the culture and history of China, Japan, and Hong Kong, as well as early European explorers. He spent many years in study and traveling East Asia, notably during the 1920s. In the early 1930s, Hart became a visiting lecturer at UC Berkeley on Chinese Art and Culture and Chinese History.

Through his many years of travels and study, Hart steadily built a collection of written observations and photographic documentation of the locales he visited - this in a time when travel was considerably more difficult than we take for granted today.

Among Hart’s personal collection are colored glass slides of various scenes from his travels, as well as an extensive collection of stereographs.

Among the paperwork Hart routinely generated, are drafts for his various books, outlines for his lecture subjects, personal letters and correspondence, and various Ephemera from his lifetime.

All these written and visual materials form the Henry H. Hart Papers, a collection acquired by CSUEB shortly after Hart’s death in 1968, and recently formally cataloged by the CSUEB University Archives here in our library.

We invite you to view images from Hart’s Lantern Slide Collection upstairs in the library (upper mall level), and to consider many of the books he authored and materials he collected, also showcased in this exhibit.

A subset of the larger Henry H. Hart Collection within the CSUEB University Library, The Marco Polo Collection showcases both primary and secondary sources that pertain to the 12th century Italian explorer, Marco Polo.

One of the first Europeans to return from China and other parts of South and East Asia and record his travels for posterity, Marco Polo described the geography and culture of these hitherto unknown regions to Europeans.

The numerous specialized volumes in this unique collection were gathered by Henry Hersch Hart as part of his extensive, life-long interest in Marco Polo and European exploration in general. Dr. Hart, himself, wrote extensively on Polo, and was a noted scholar in this field.

In 1271, Venetian Marco Polo (at seventeen years of age), his father, and his uncle set off for Asia from Venice, eventually traveling extensively throughout the kingdom of China, then ruled by the Mongol, Kublai Khan.

After he returned to Venice in 1295, 24 years later, with many riches and treasures, Marco and his companions found Venice at war with Genoa, and were imprisoned. During his imprisonment Polo dictated the experiences of his 15,000-mile journey to a cellmate, and eventually published what came to be known as The Travels of Marco Polo.

After his release in 1299, Polo became a wealthy merchant, living another 25 years and raising a family. Even though many who still clung to a medieval mind-set met Marco’s book with disbelief, its legacy was to introduce Europeans to Central Asia and China.

Generally accepted as true over the centuries, Polo’s adventures recounted in his Travels were largely unchallenged until the 1990s – long after Henry H. Hart’s death. Consequently, the materials in The Marco Polo Collection do not reflect the revisionist scholarship – led by Frances Wood in the 1995 book, Did Marco Polo Go to China? - that attempted to question Polo’s accuracy, if not his veracity.

Current reference books still generally show that Polo has survived these recent revisionist storms, however, and Henry Hart’s extensive collection of materials on Polo clearly shows the great extent to which his Travels has been published, analyzed, and accepted for over 700 years.

Other panels in the current exhibit on our library walls highlight various aspects of Hart and his wide-ranging interests – especially related materials in the CSUEB Special Collections of the University Library that deal with the subject of European exploration and discovery.

The Novus Atlas Sinensis (New Atlas of China) was prepared by the Jesuit priest Father Martino Martini of the Society of Jesus and published in 1655, one of the very earliest European attempts to map China. An Italian Jesuit, Father Martini died at Hangzhou in 1661.

Based on Chinese sources, the atlas was remarkably accurate for the time, and featured China’s eastern coastline in detail, including the Shantung promontory.

It would be over 80 years – with the publication of Jean Baptisite d’Anville’s Atlas de Chine in 1737 - before any other European atlas could be considered comparable to the Novus Atlas Sinensis. Both publications were the product of Jesuit scholarship.

Adjacent panels featured on this wall show a small sampling of pages from this remarkable 358-year-old geographic and artistic masterpiece.

NOTE: 4 adjacent panels in this atlas tableaux image maps and pages from the atlas – no text available:

POSTCARDS of LAOS and INDOCHINA in the EARLY 1900s

During the course of his research and travels, Henry Hart acquired numerous items and curiosities that reflected both the subjects in which he was interested, as well as the times in which he lived. Among the items pictured here are a stereoscope with numerous sets of commercially produced “slides” that allowed the viewer of this hand-held device a 3-D sensation. Note the book-like leather volumes in which these slide cards were packaged. Immediately below these “books” is a hand-carved woodblock stamp that may have been Hart’s own personal “logo” for identifying certain documents or artwork as his own. Underneath the stamp are the directions for one of Hart’s lantern projectors. Also pictured are Chinese game tiles. Adjacent panels show many of the postcards that Hart acquired through the years.

POSTCARDS of JAPAN in the EARLY 1900s

Among the materials that comprise the Henry H. Hart Collection at CSUEB, are numerous published works by Hart. During the course of his travels and research, Hart wrote a great deal, and many drafts of his books, lecture notes, newspaper clippings, and personal and legal documents have thus found their way into the Hart Collection here at CSUEB.

During Henry Hart’s travels to what was then called “The Far East,” he took numerous photographs.  Upon his return, in order to share these with his peers back in the States, he utilized the lantern-slide technology of the early 20th century to dramatically display images from his travels - a precursor to later 35mm slide show and current PowerPoint presentation. His frequent travels to the region were not commonplace for the average American in the early 1900s. Hart made numerous trips to China, Japan, and Southeast Asia in the first three decades of the 20th century.

Exhibit Materials an Embarrassment of Riches!

For one thing, Henry Hart was a fascinating character - a world traveler and scholar from the early 20th century. He lived in a period in which travel was time-consuming and often difficult, and not to be undertaken lightly.

Even so, Hart's travels managed to reflect a singleness of focus because of his ability to appreciate the cultures with which he came into contact - the subjects he recorded through his photography and collecting reflect this.

Furthermore, Hart's scholarship and erudition also drove those aspects of his collections that were not a direct result of his travels: the books, maps, and other materials dealing with the Age of Exploration in Europe, alone, could form the basis of an exhibit at some point. Here, we could only allude to his interests in Marco Polo, e.g., or the activities of the Jesuit missionaries in 17th century China.

We would not be surprised if there were not another exhibit or two buried in these and other as yet unexamined Hart materials in Special Collections.

Copyright 2013 by the CSUEB University Libraries