Wall exhibit of photographs from the life of president Franklin D. Roosevelt currently on display at the CSUEB Concord Campus Library as part of the Kirk O. Rowlands FDR Research Collection. 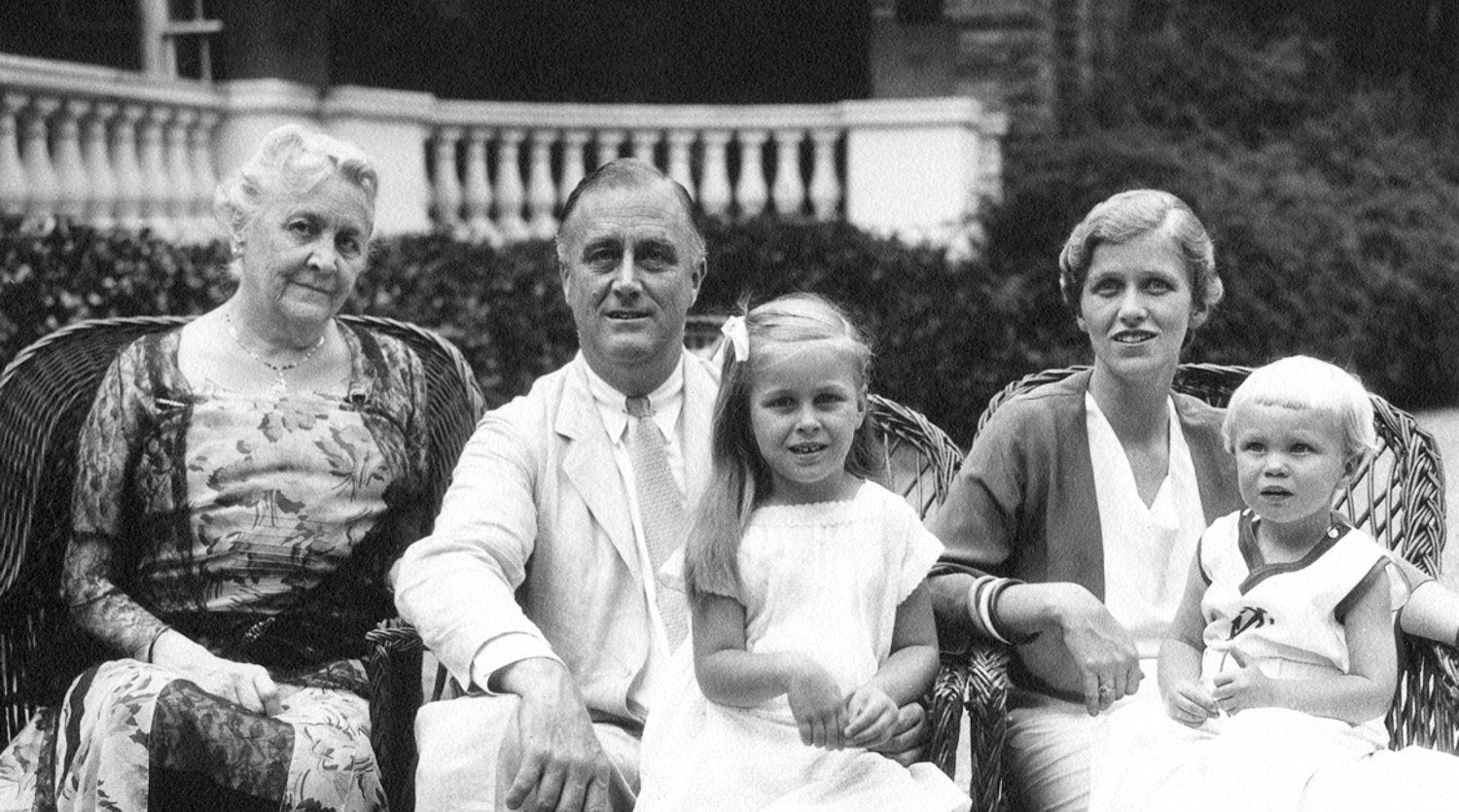 If you need to research Roosevelt or American politics in the early 20th century, we invite you to visit the Kirk O. Rowlands FDR Research Collection on the second floor of the Concord Campus Library. You'll find the Collection's study area quiet, bright and relaxing - and, as an added treat, you'll find dozens of photographs of FDR from 1900 to 1945 to set the mood and keep you company!

Installed in 2010 when Kirk O. Rowlands donated his extensive FDR book and research collection to the Concord Campus Library, this is an on-going display, subject to changes of images from time-to-time. 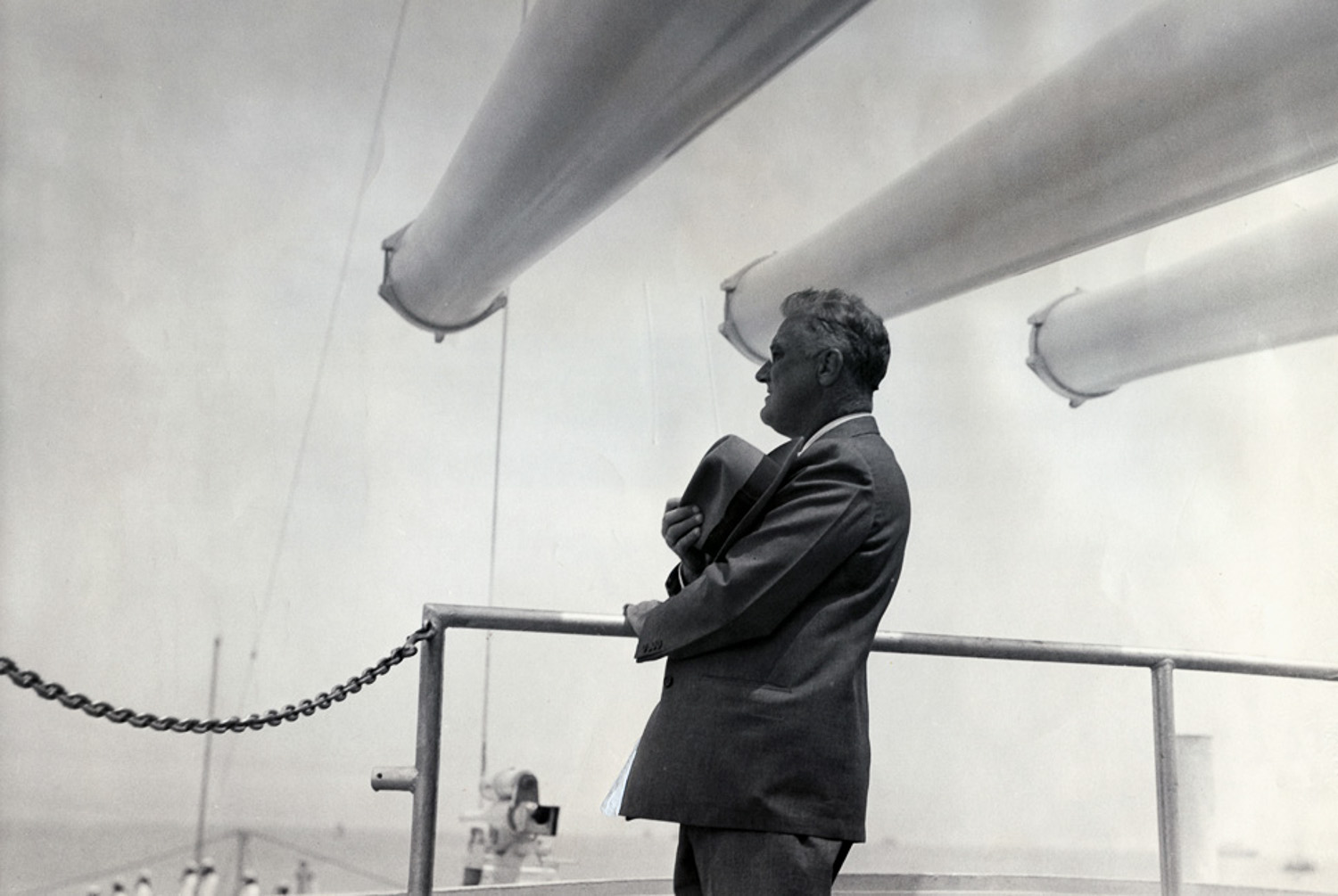 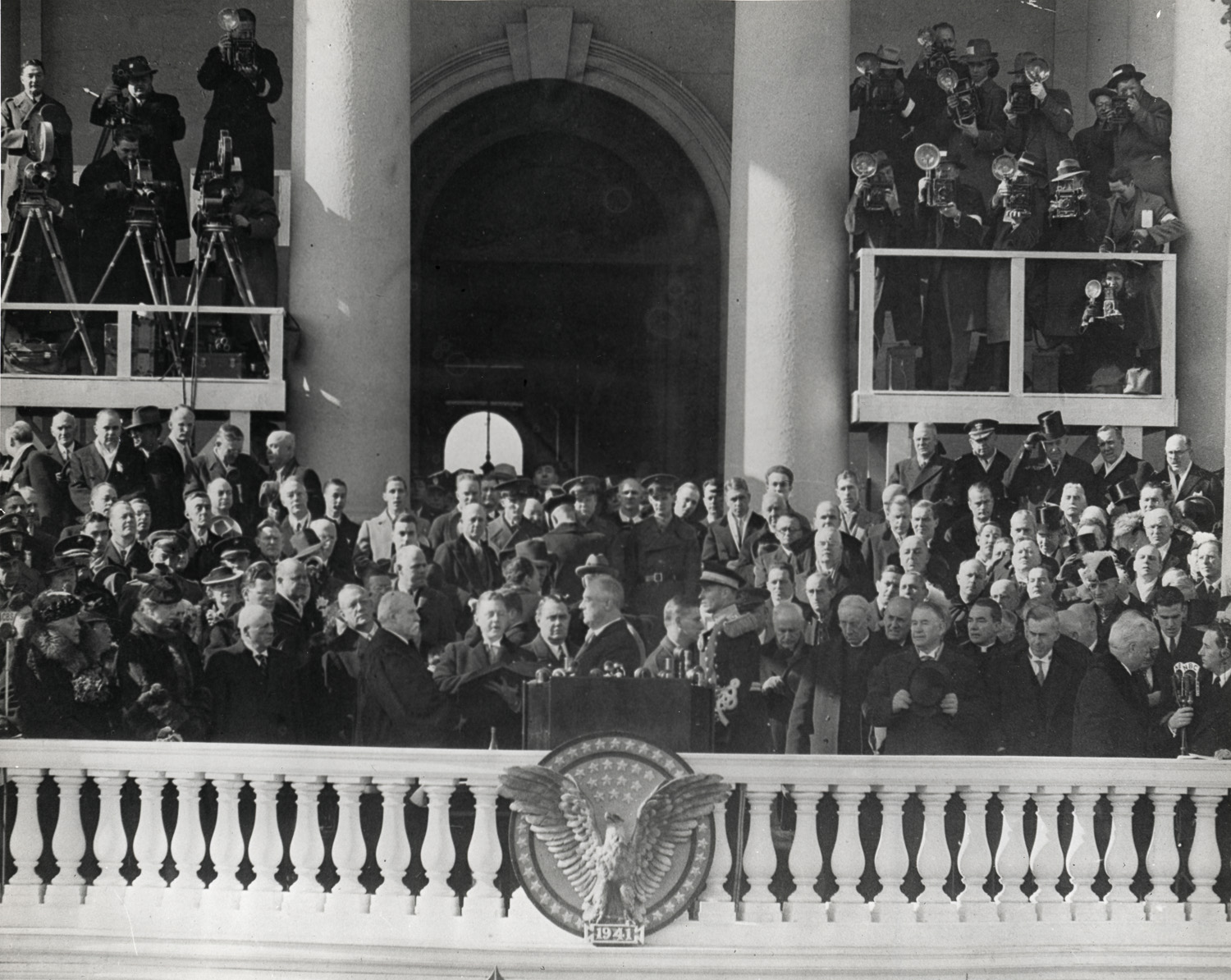 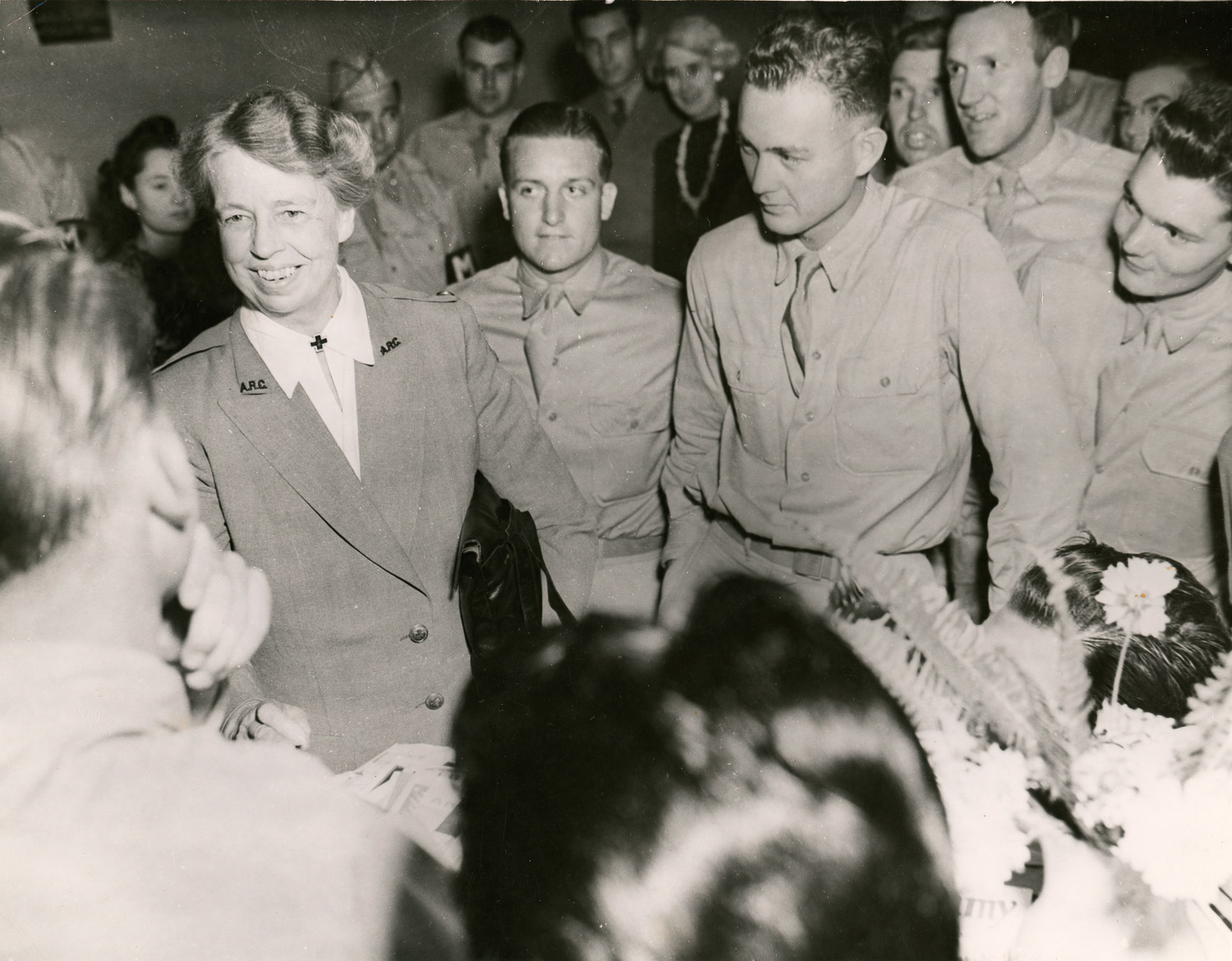 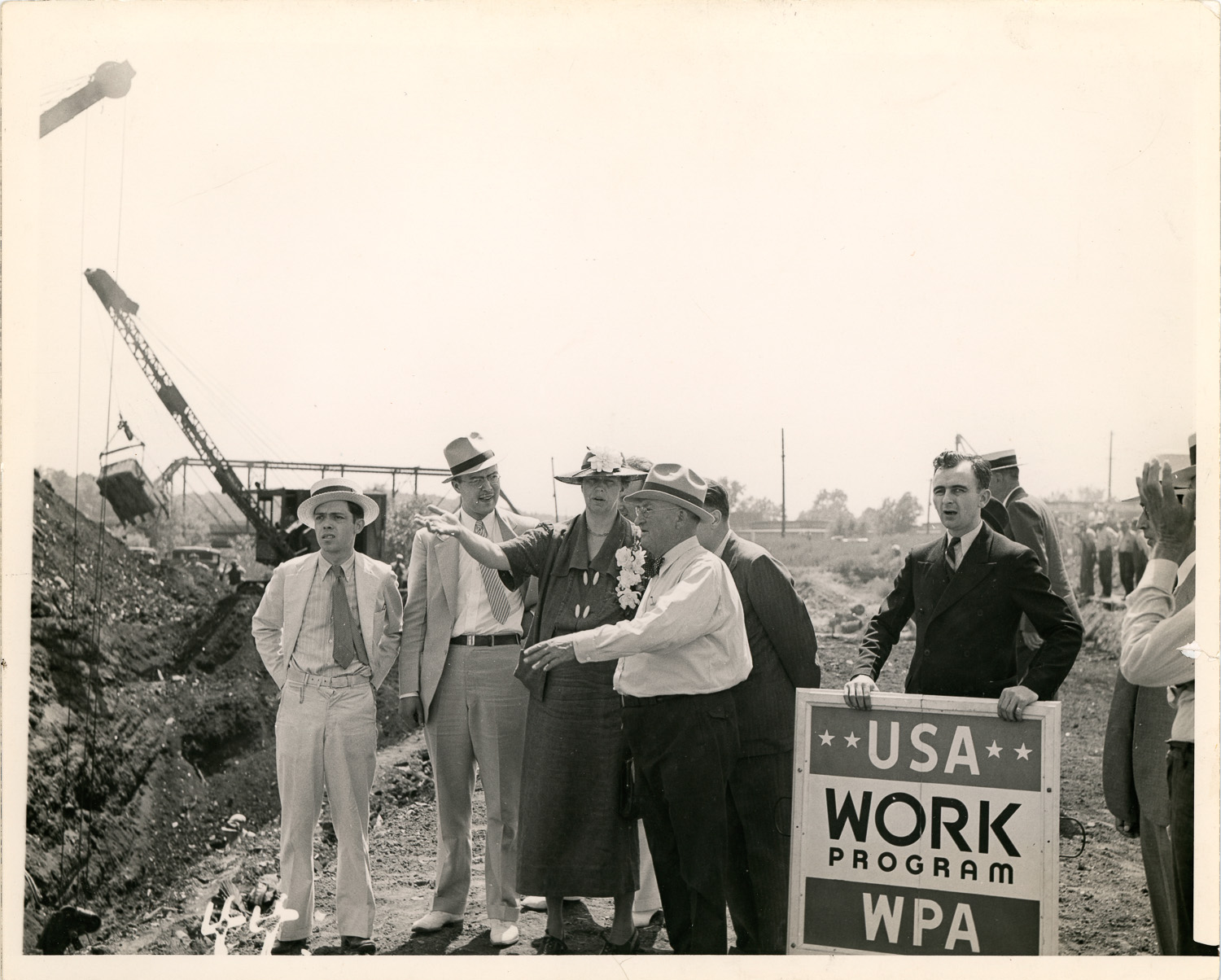 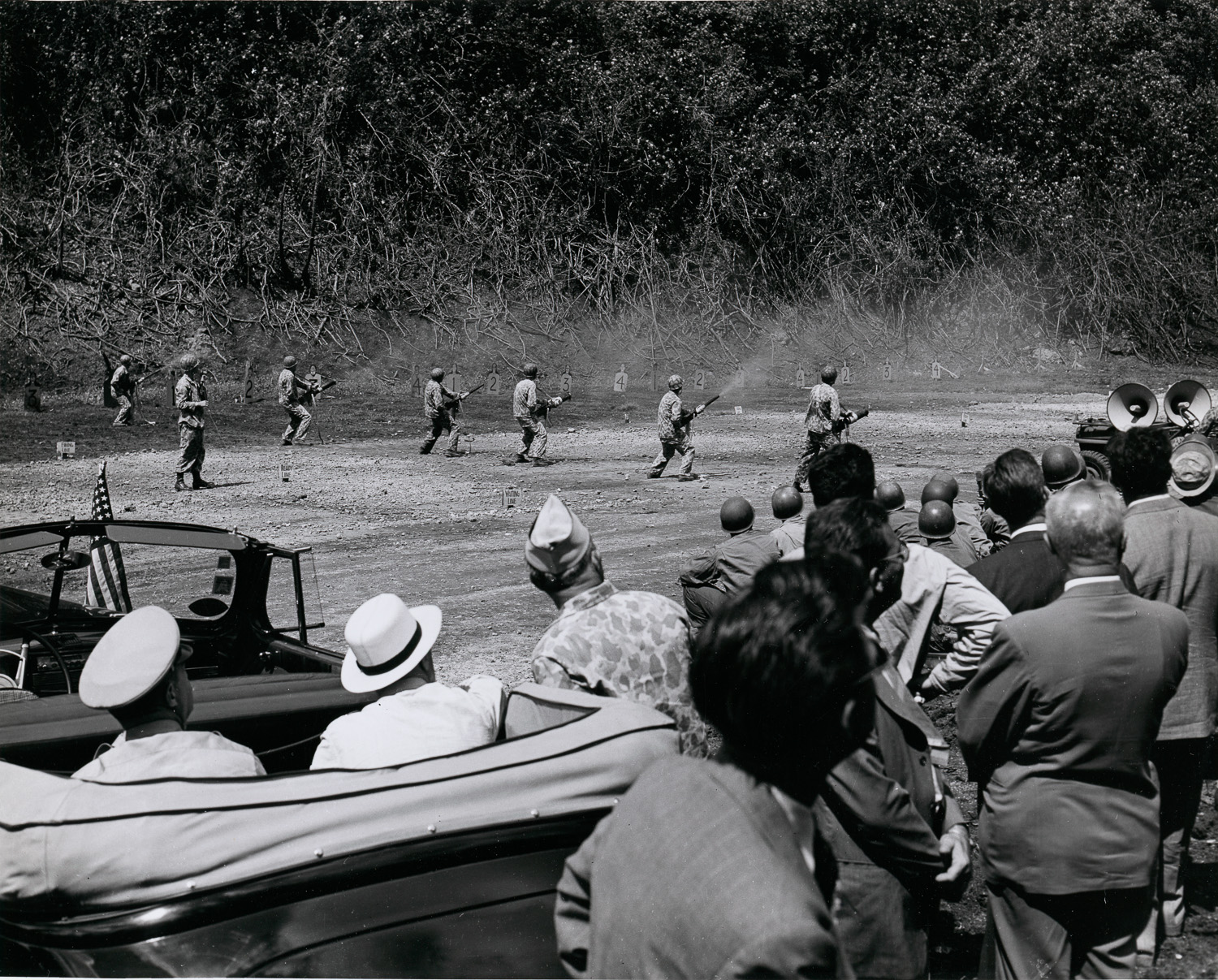 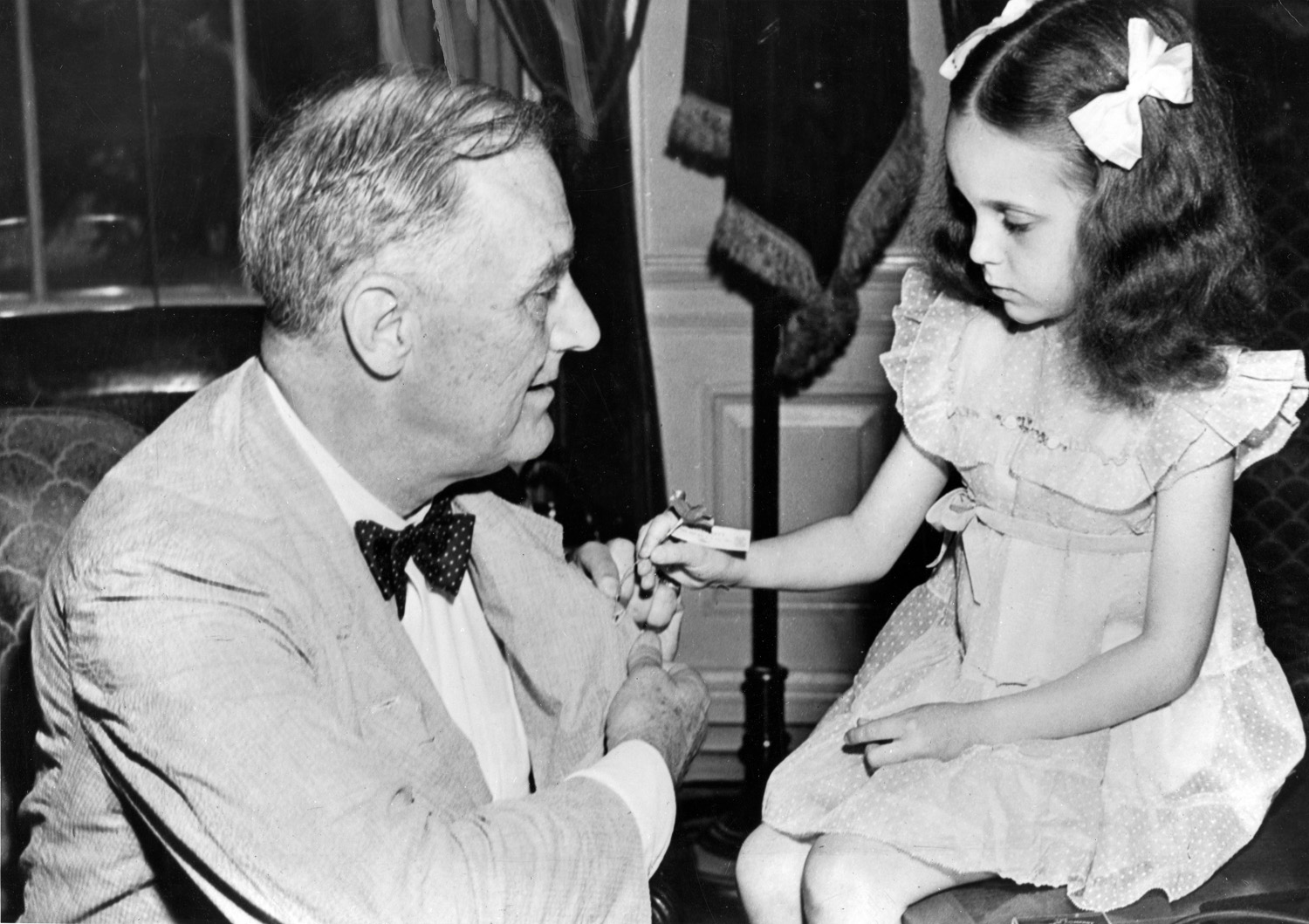 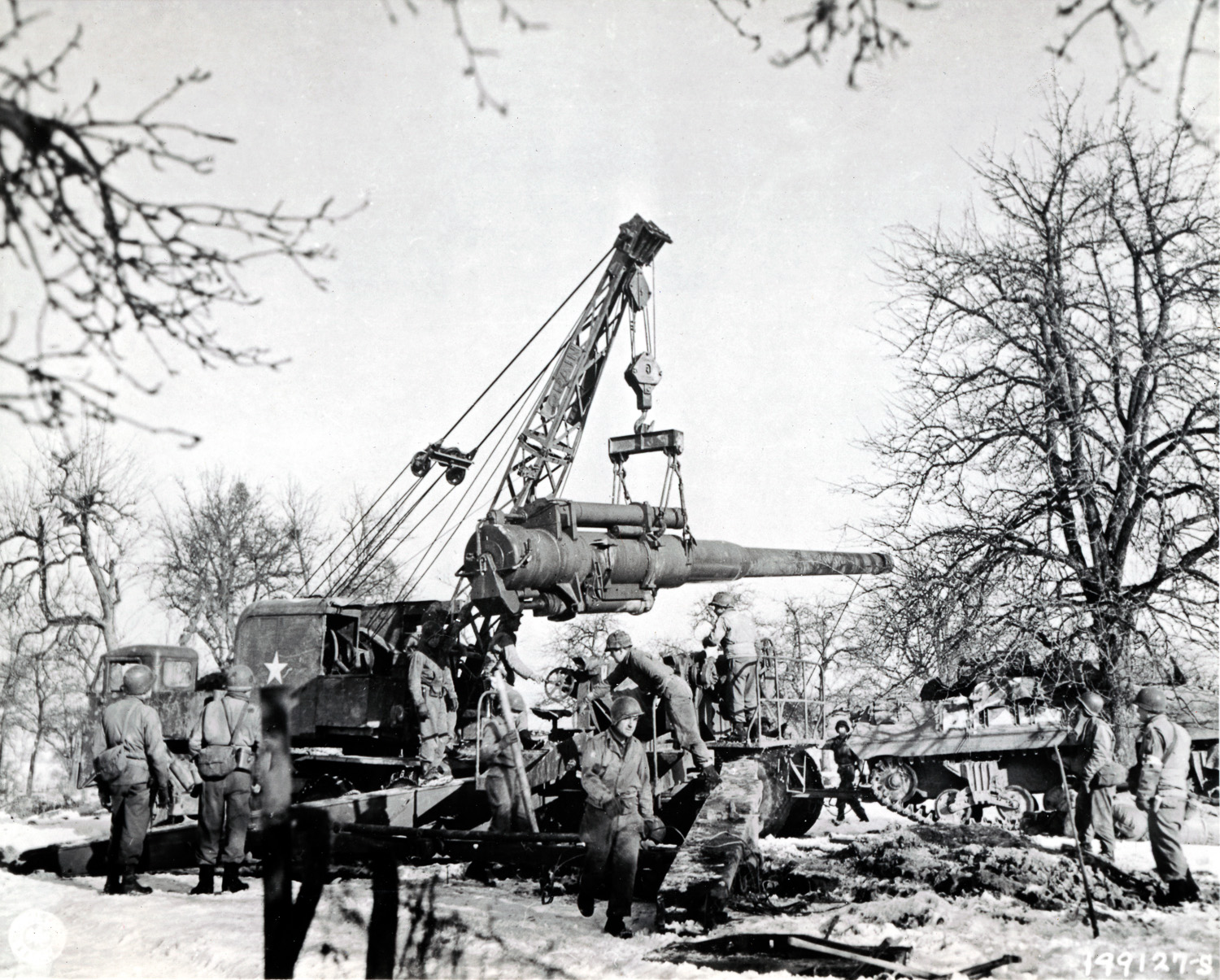 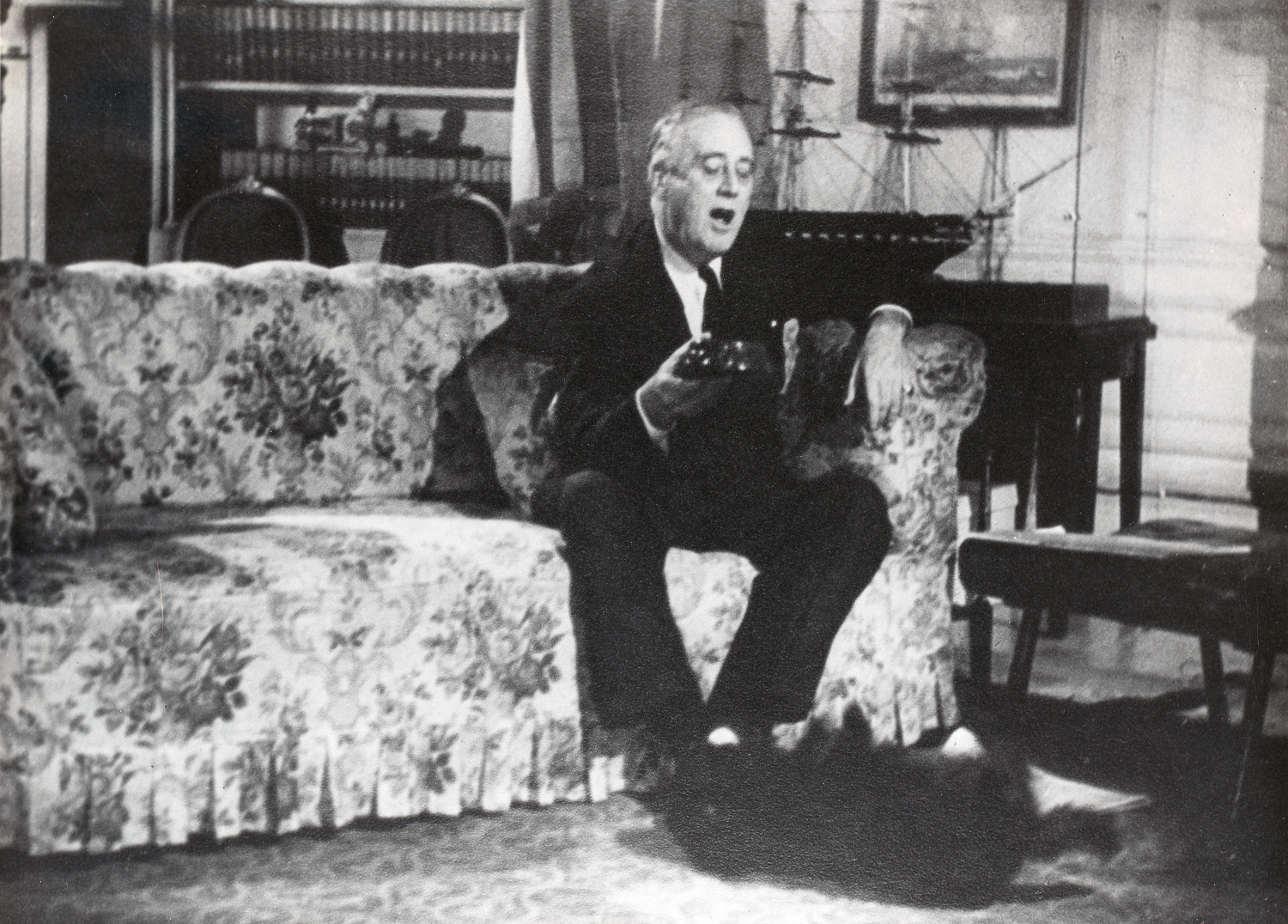 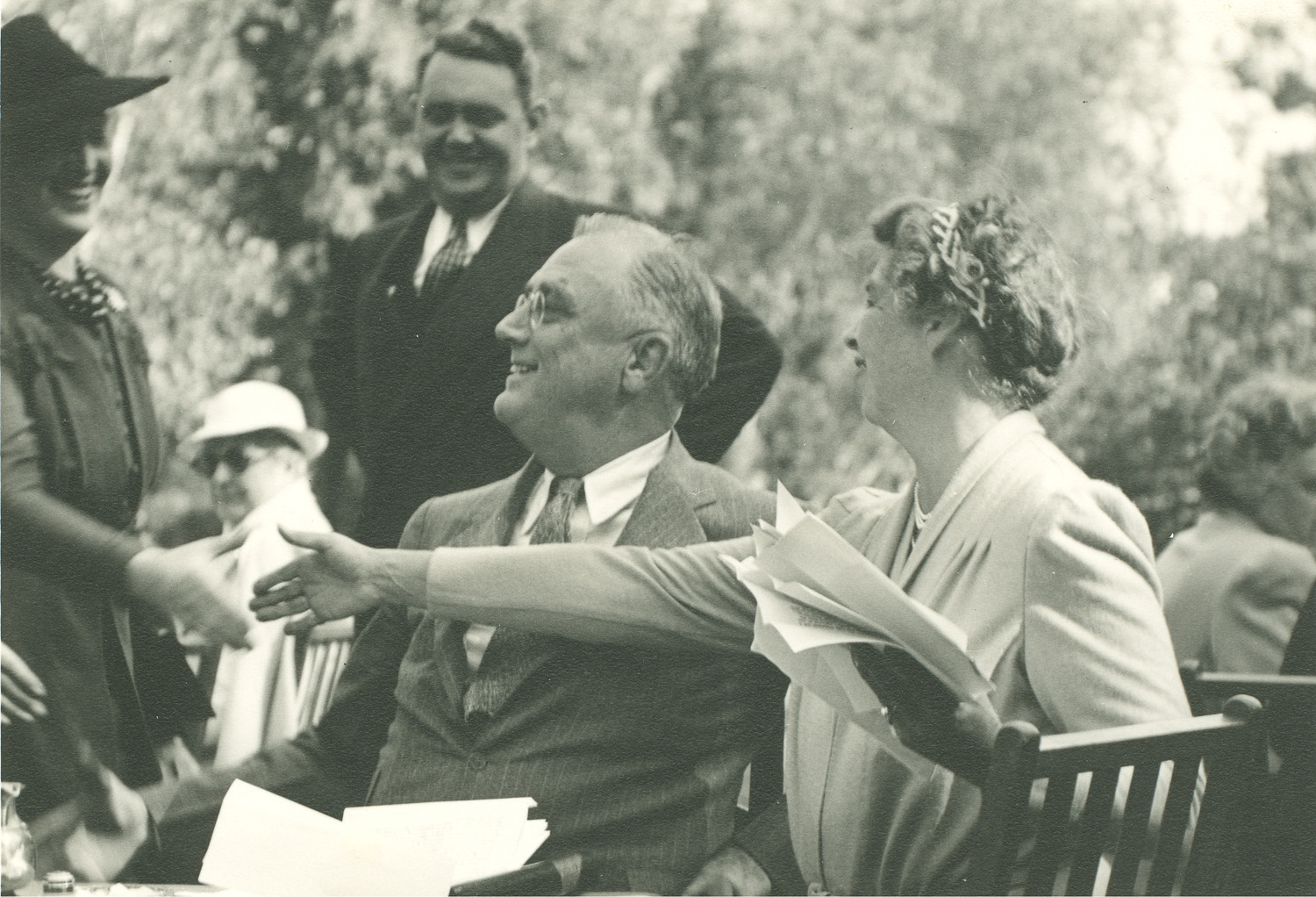 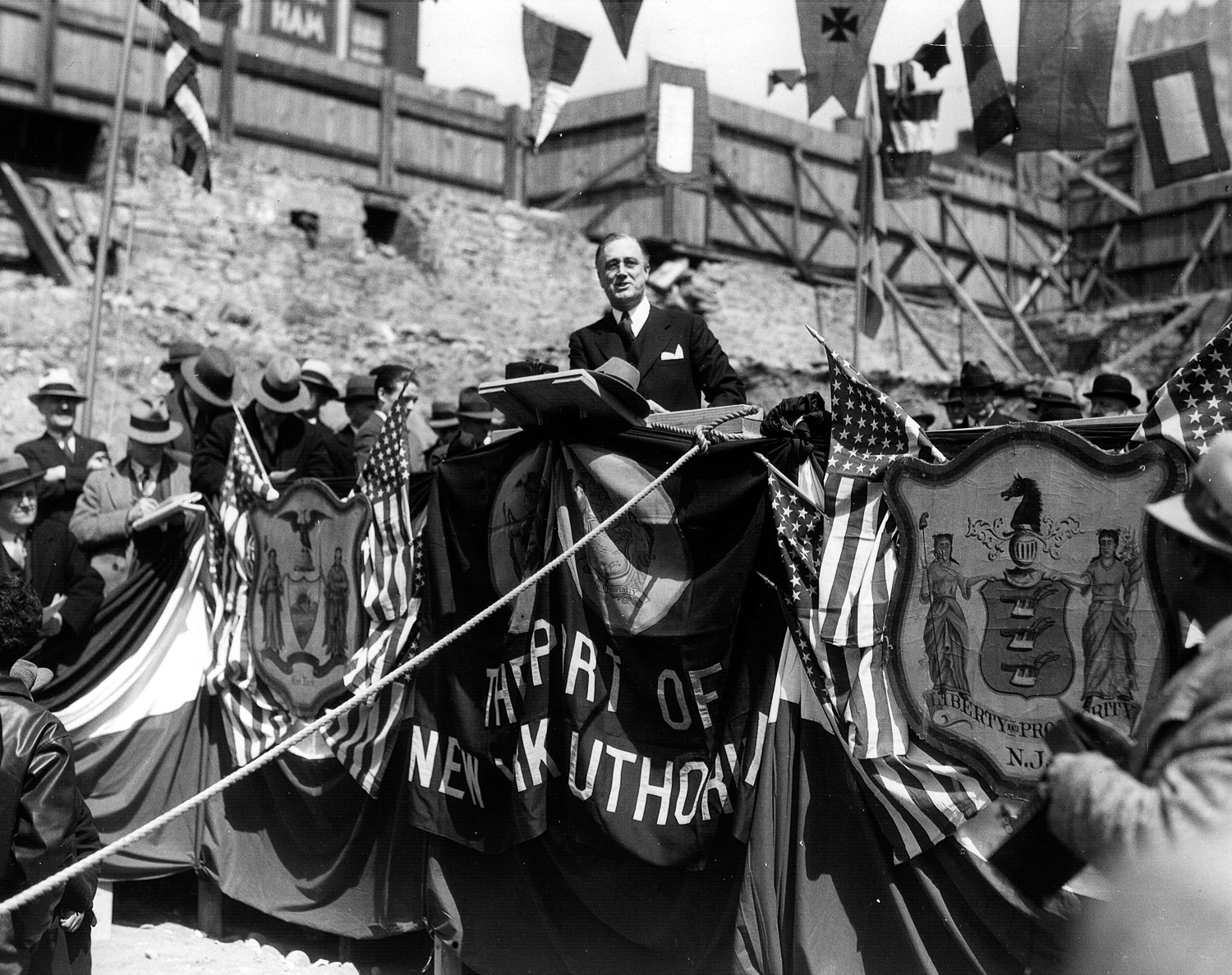 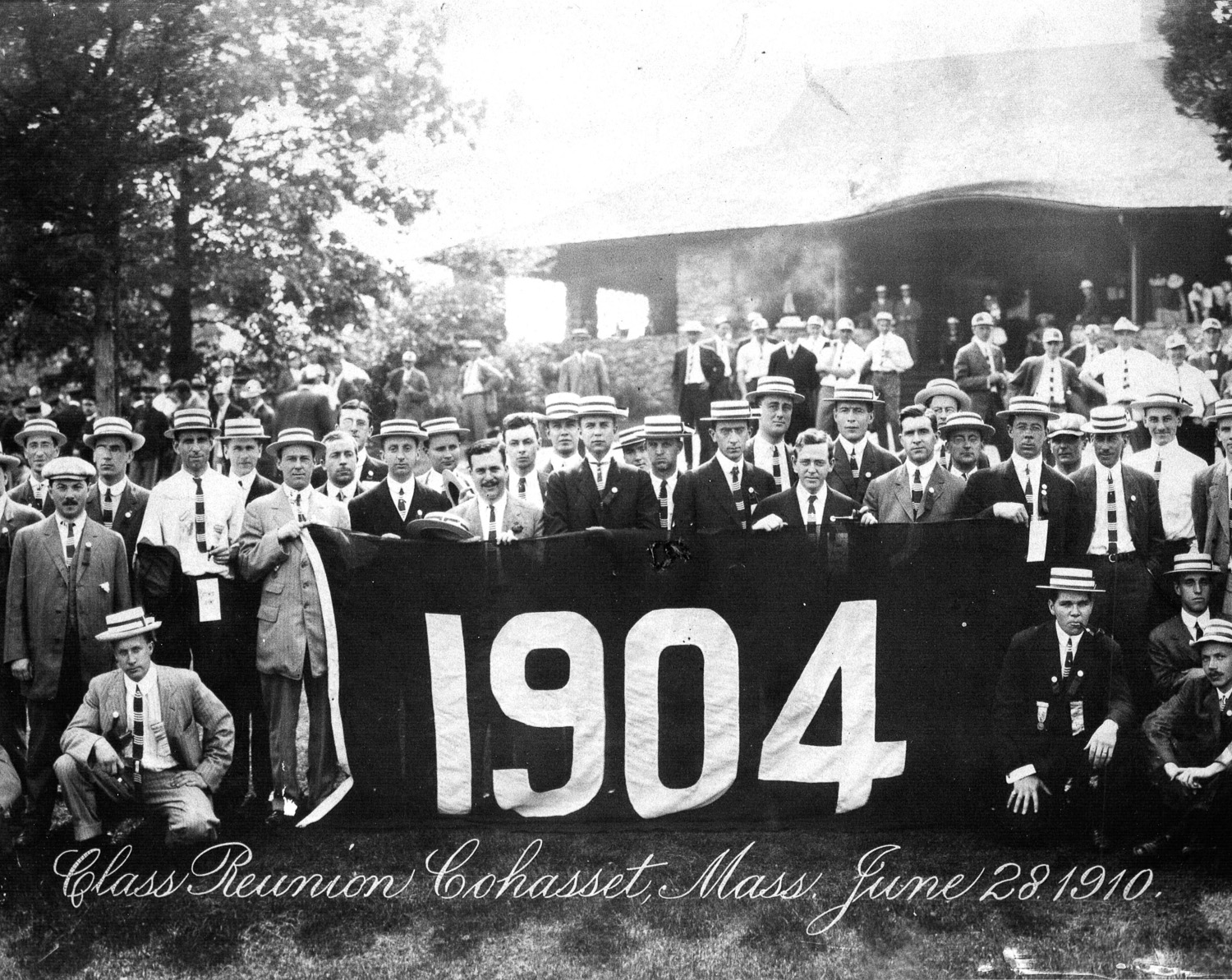 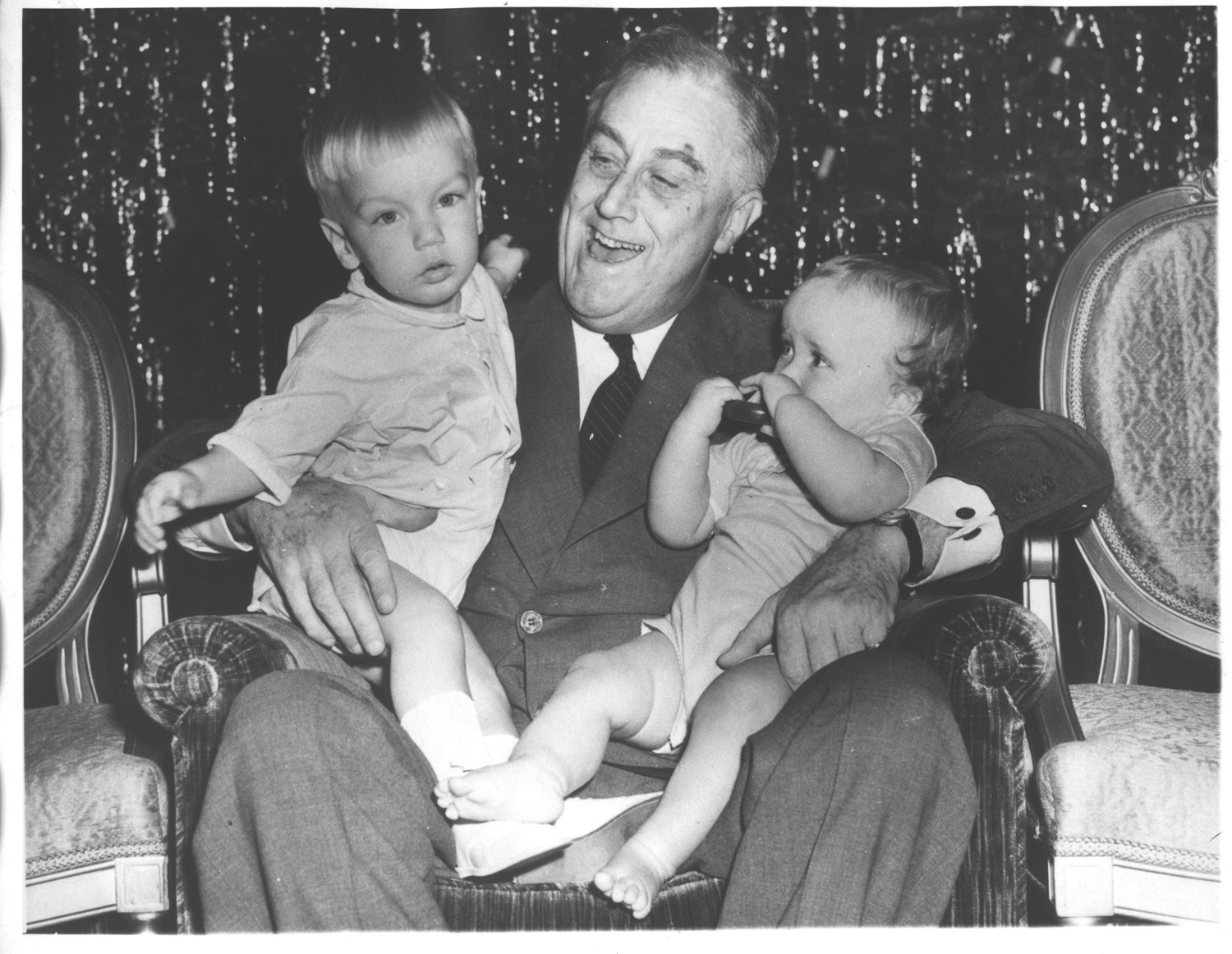 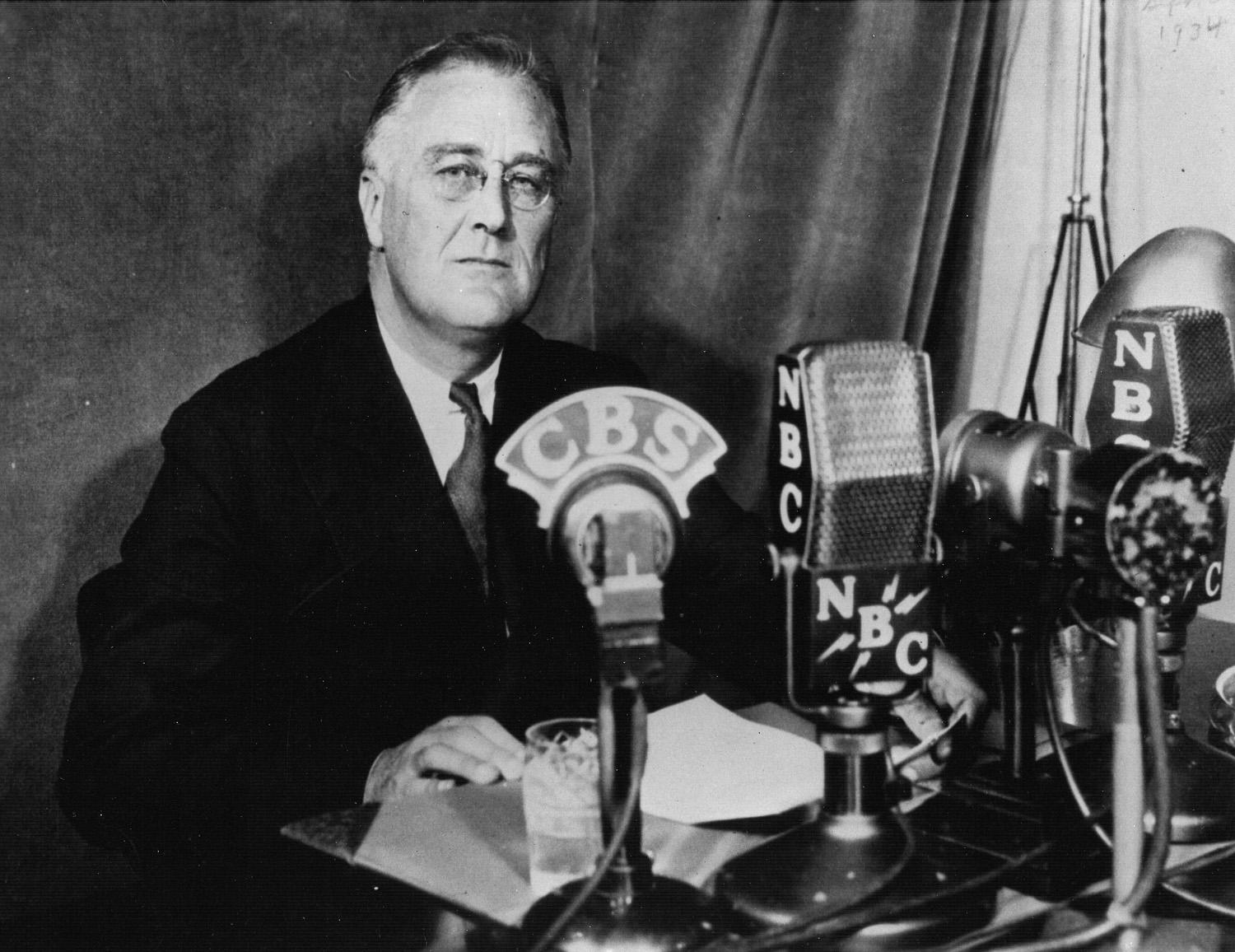 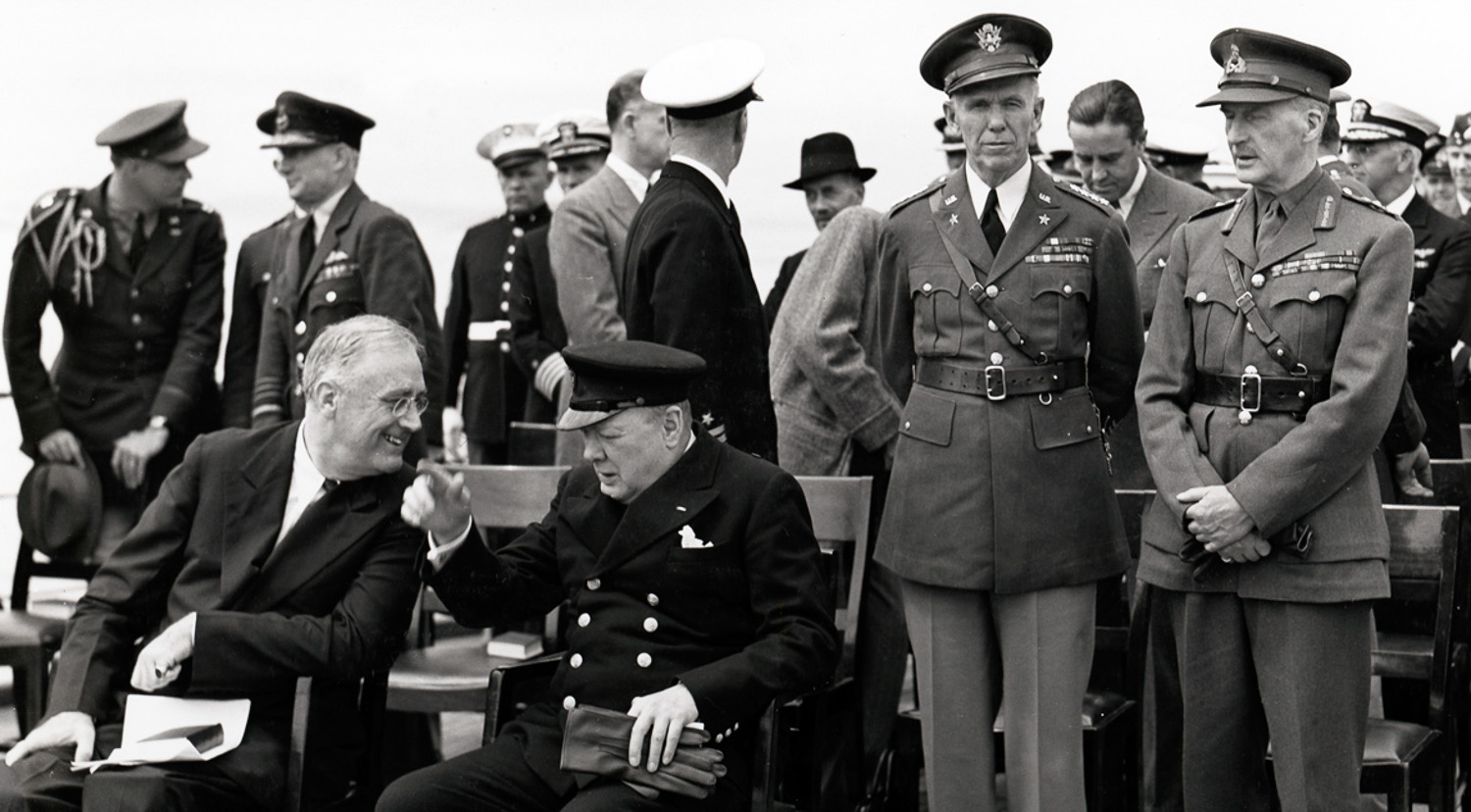 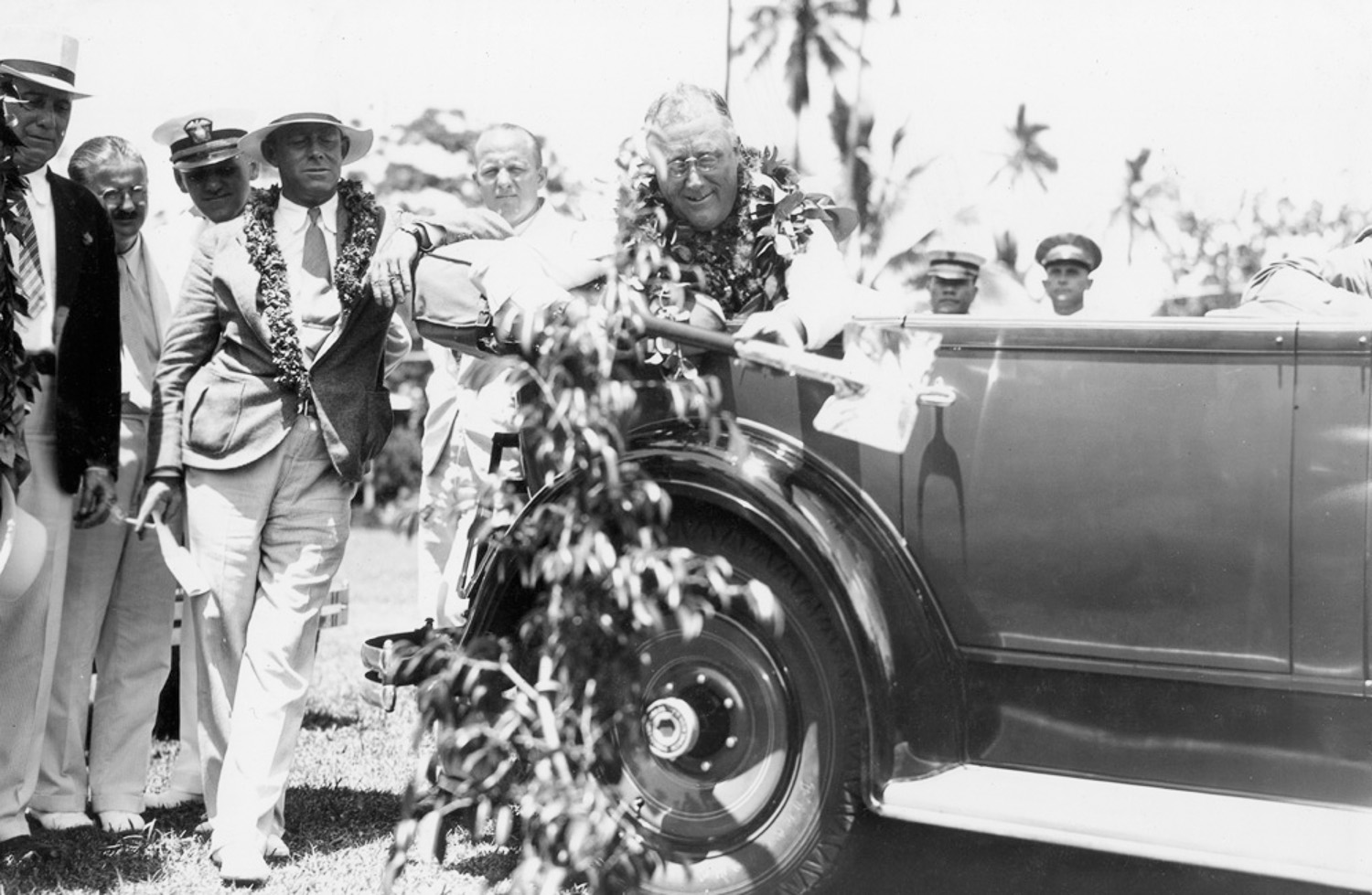 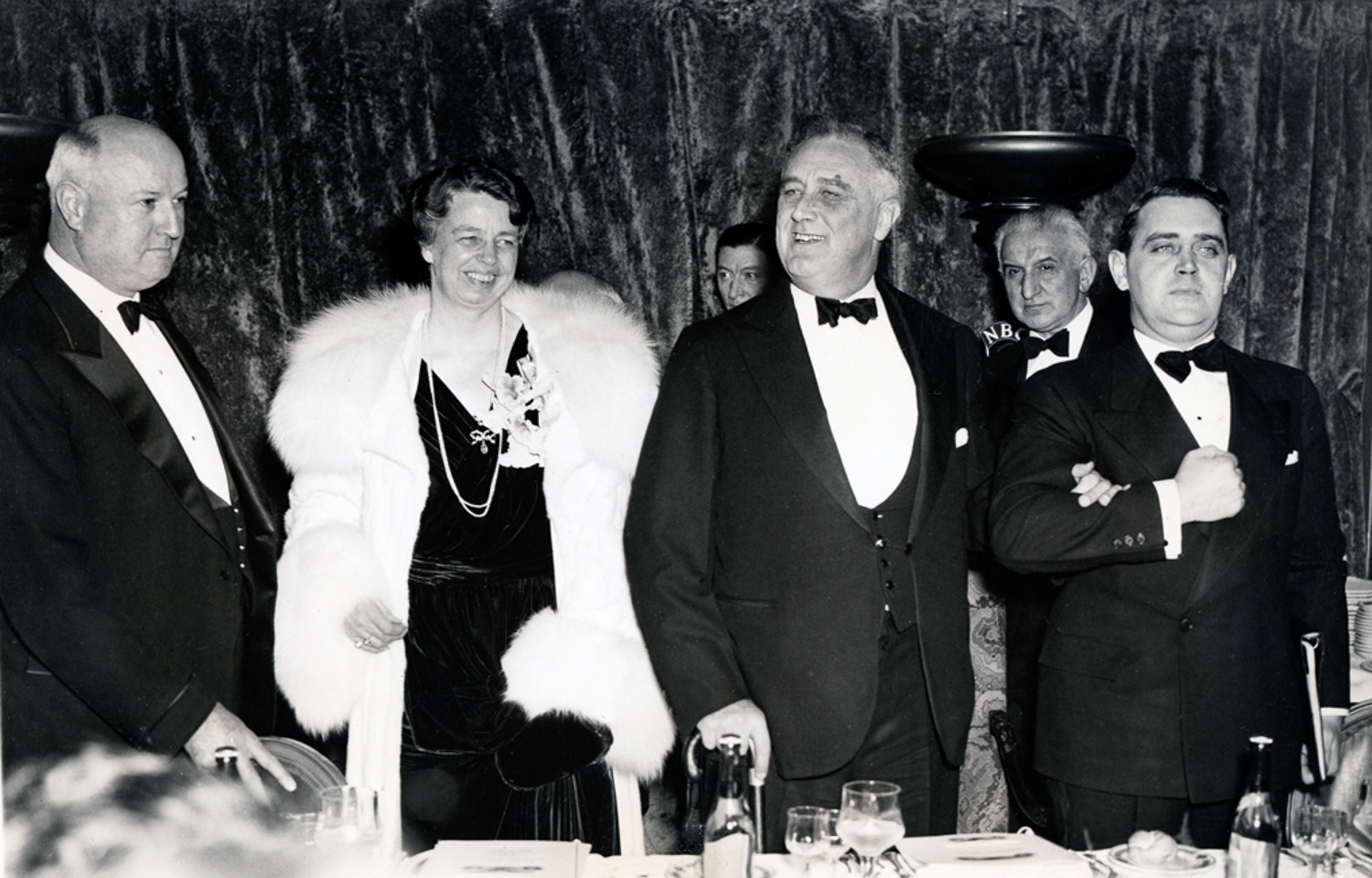 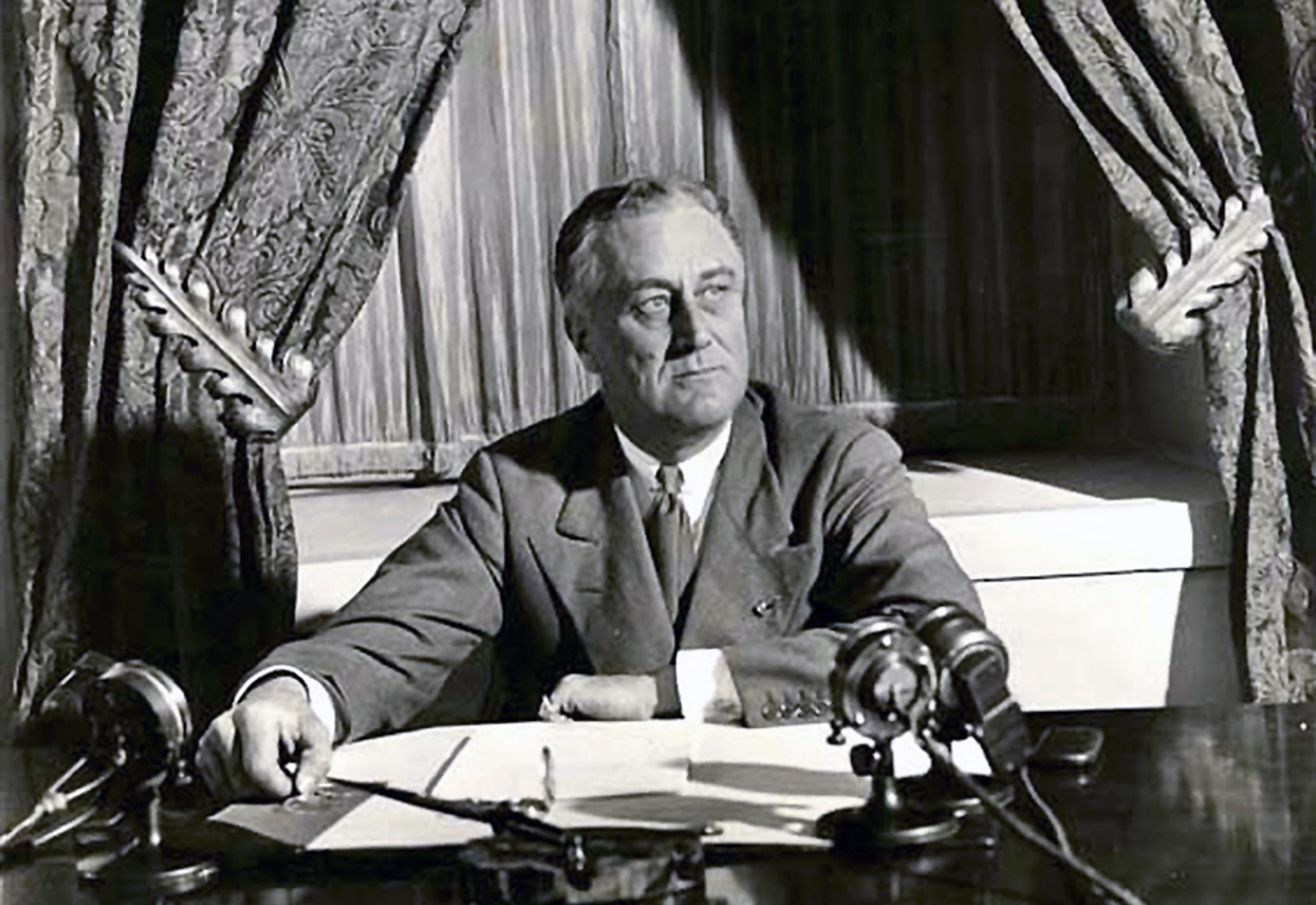 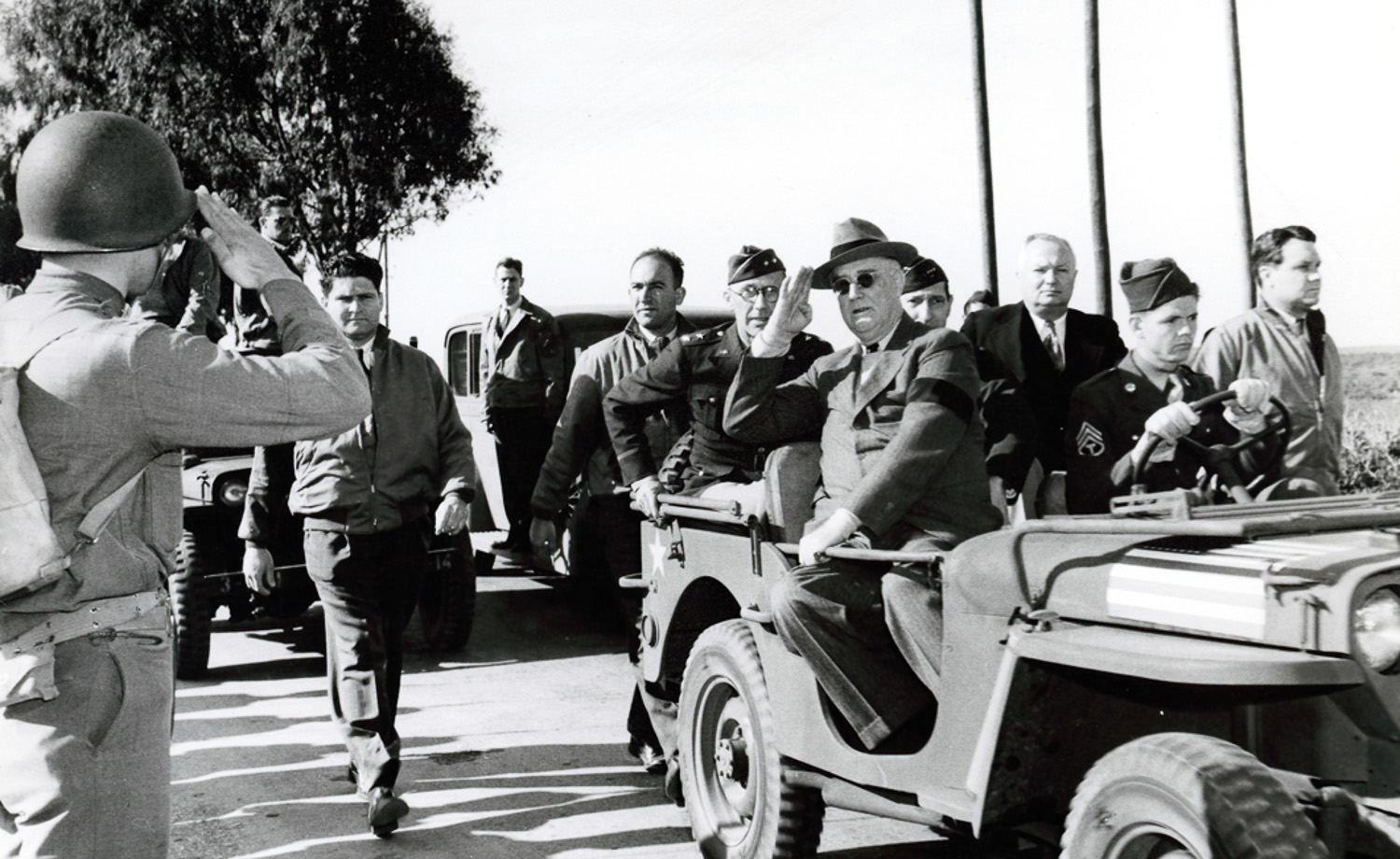 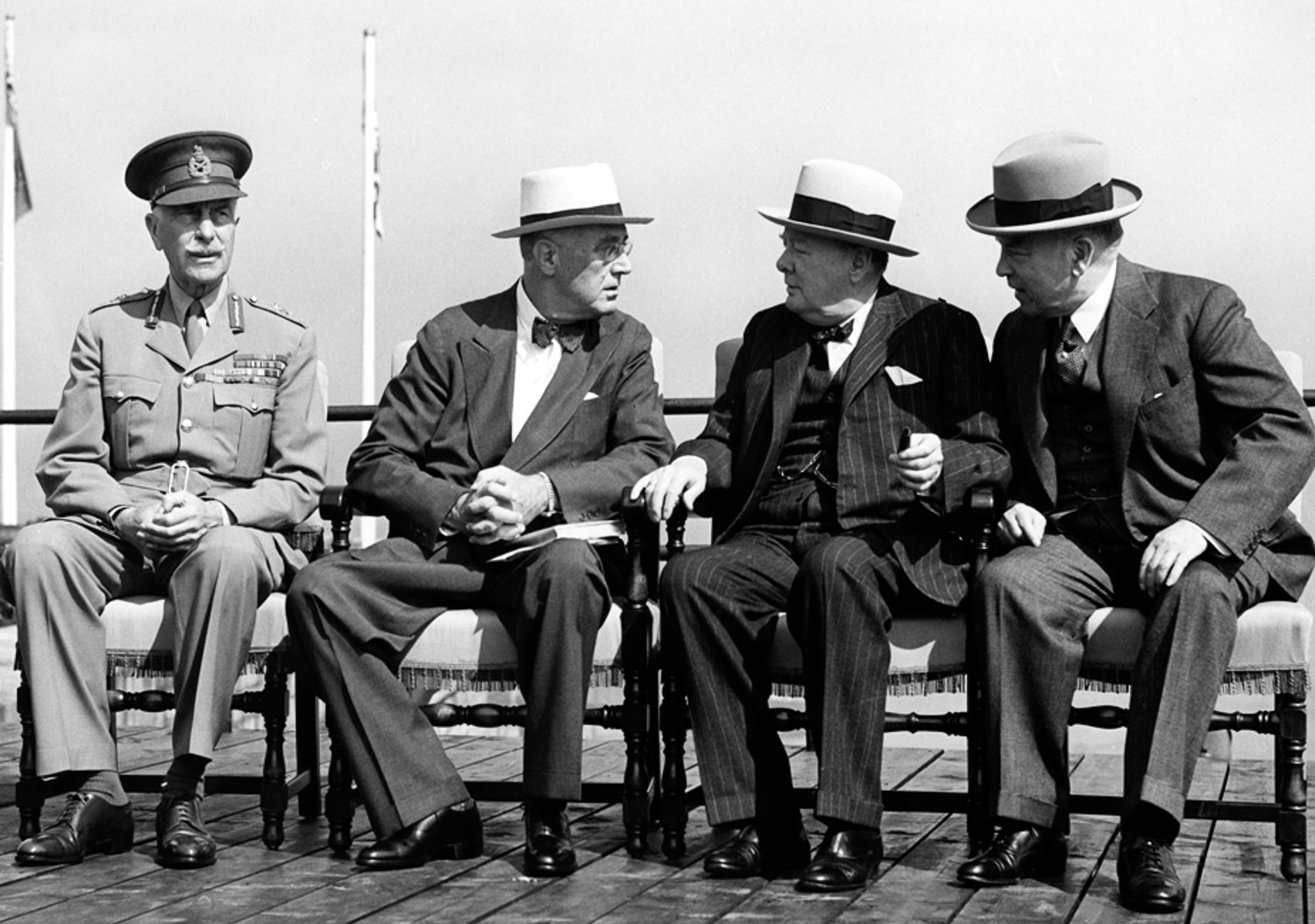 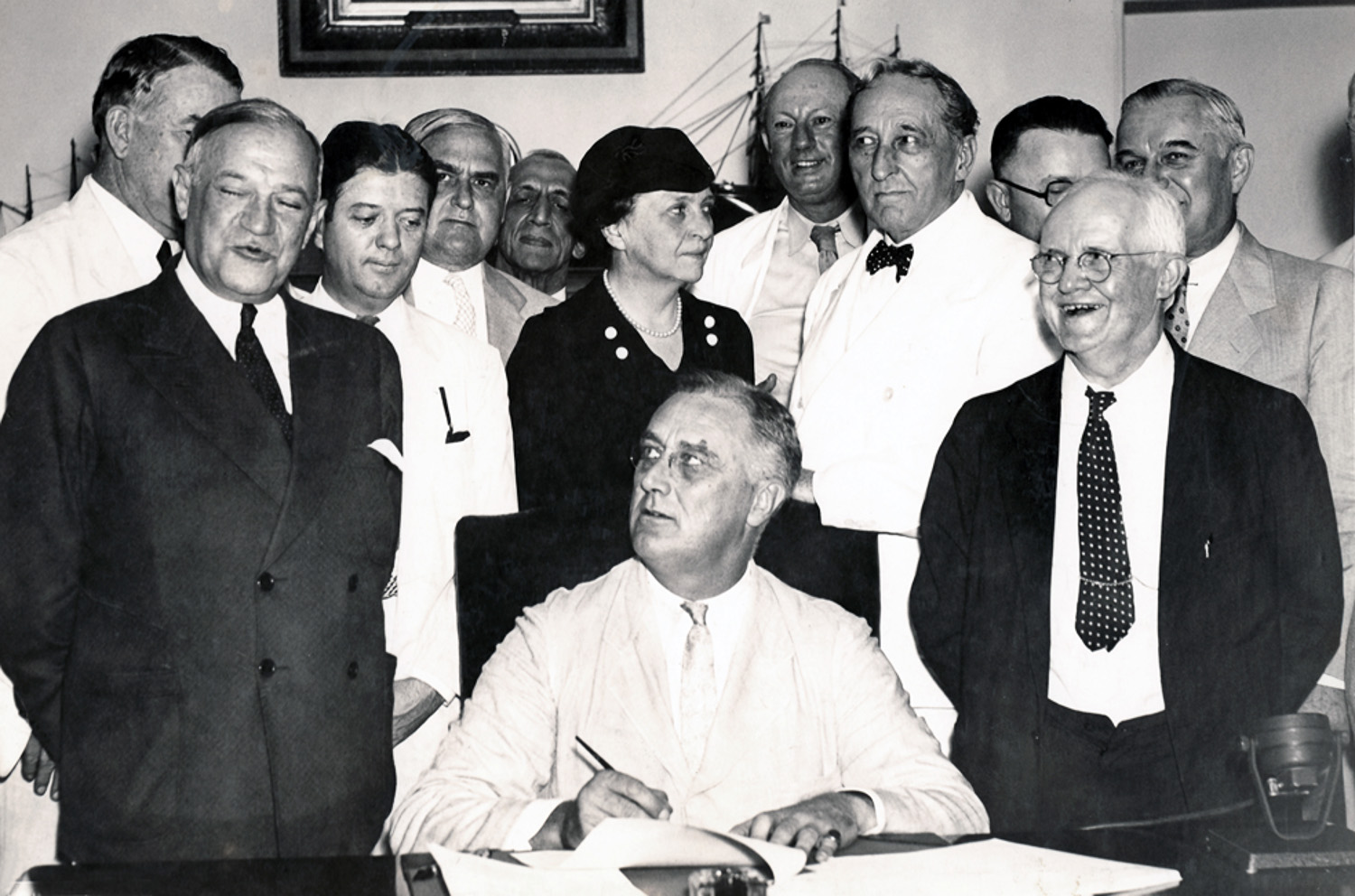 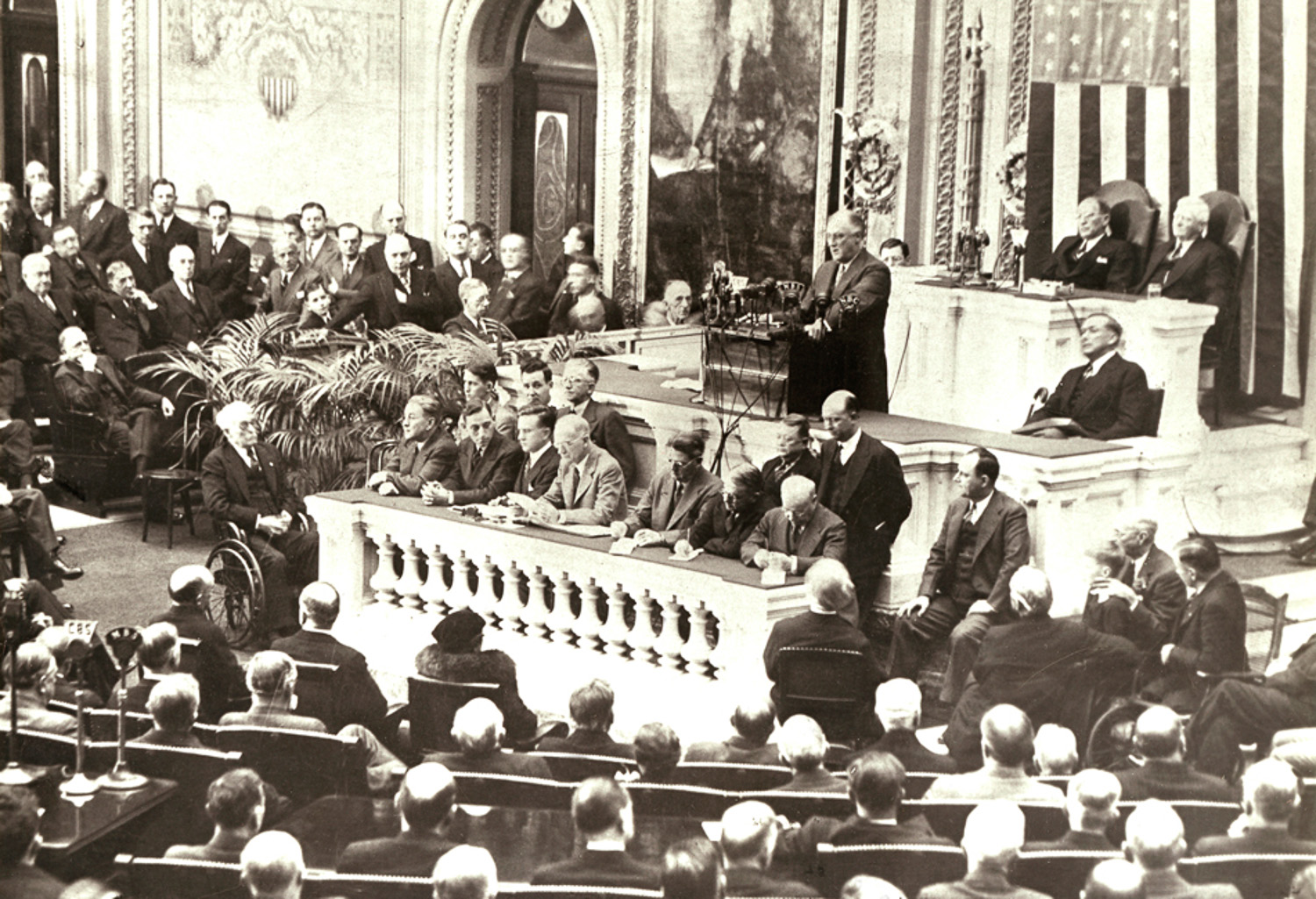 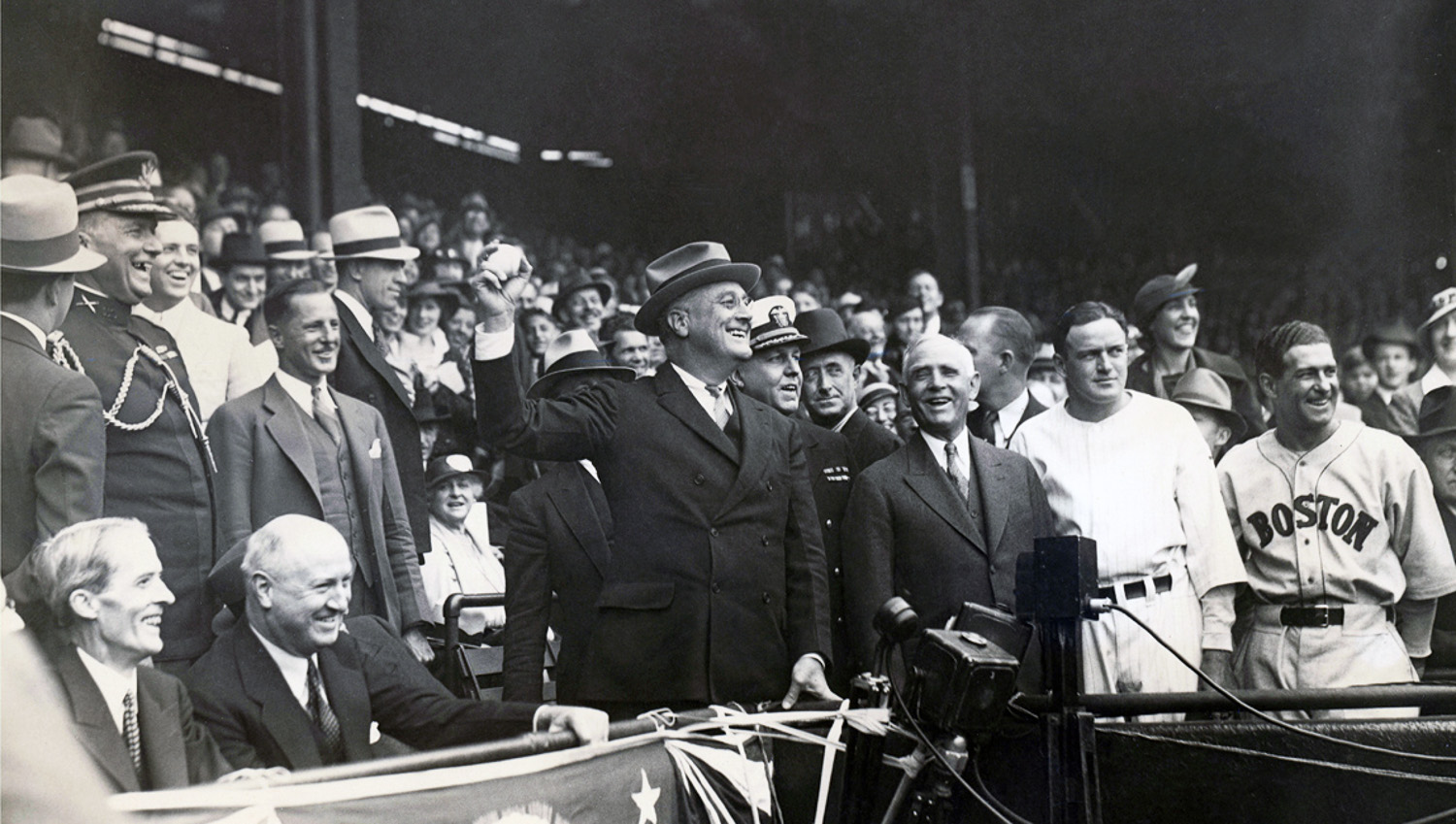 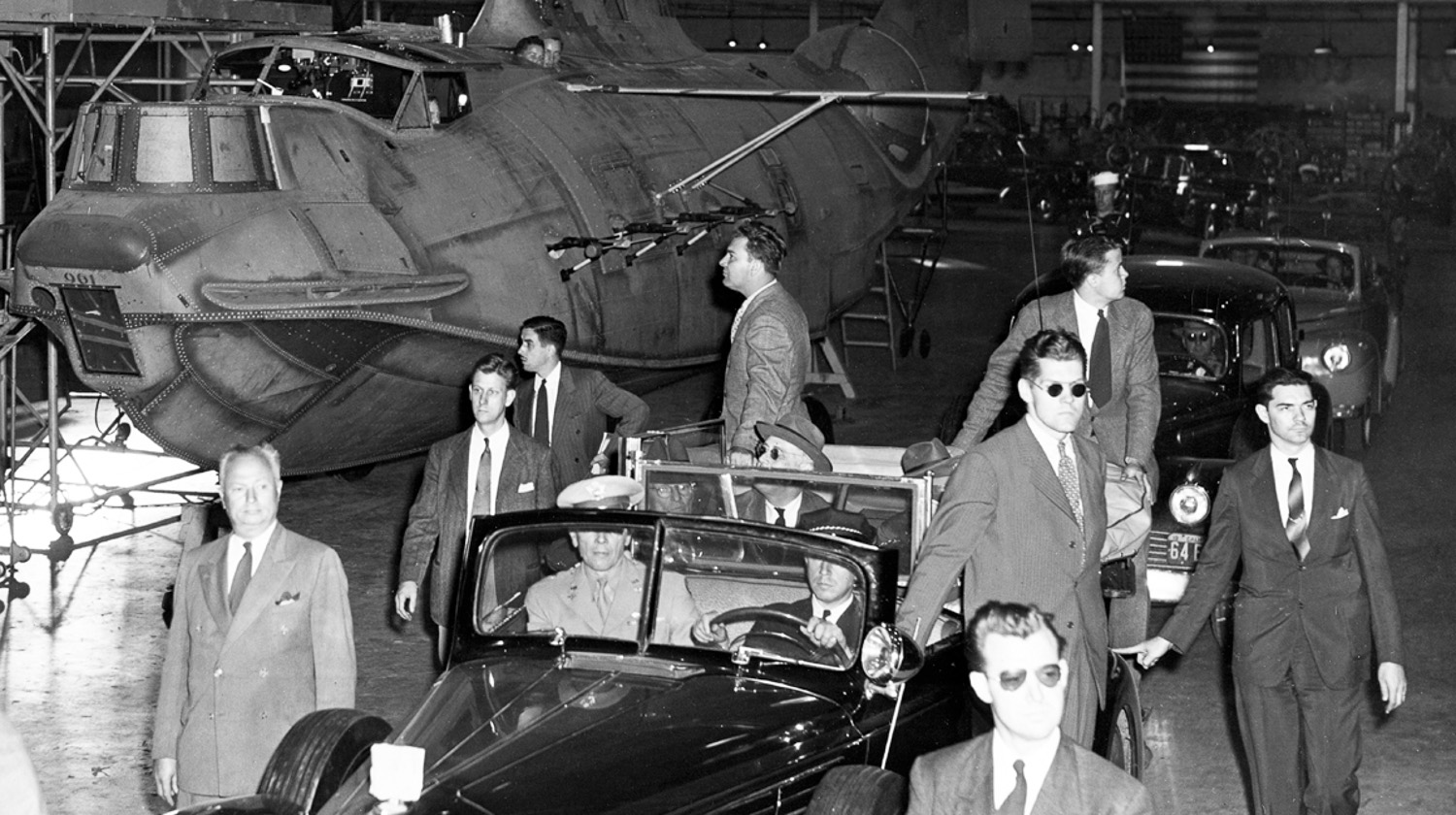 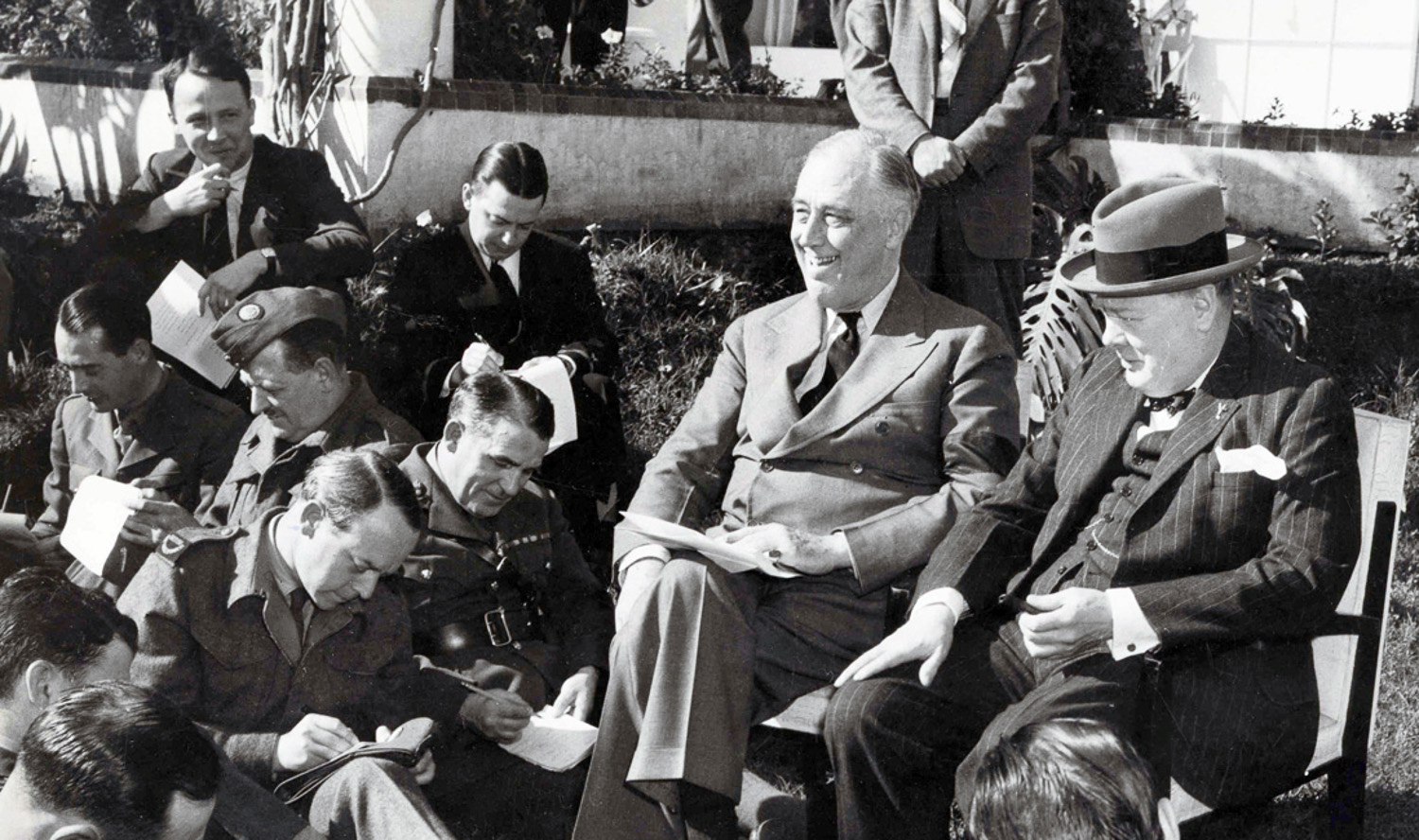 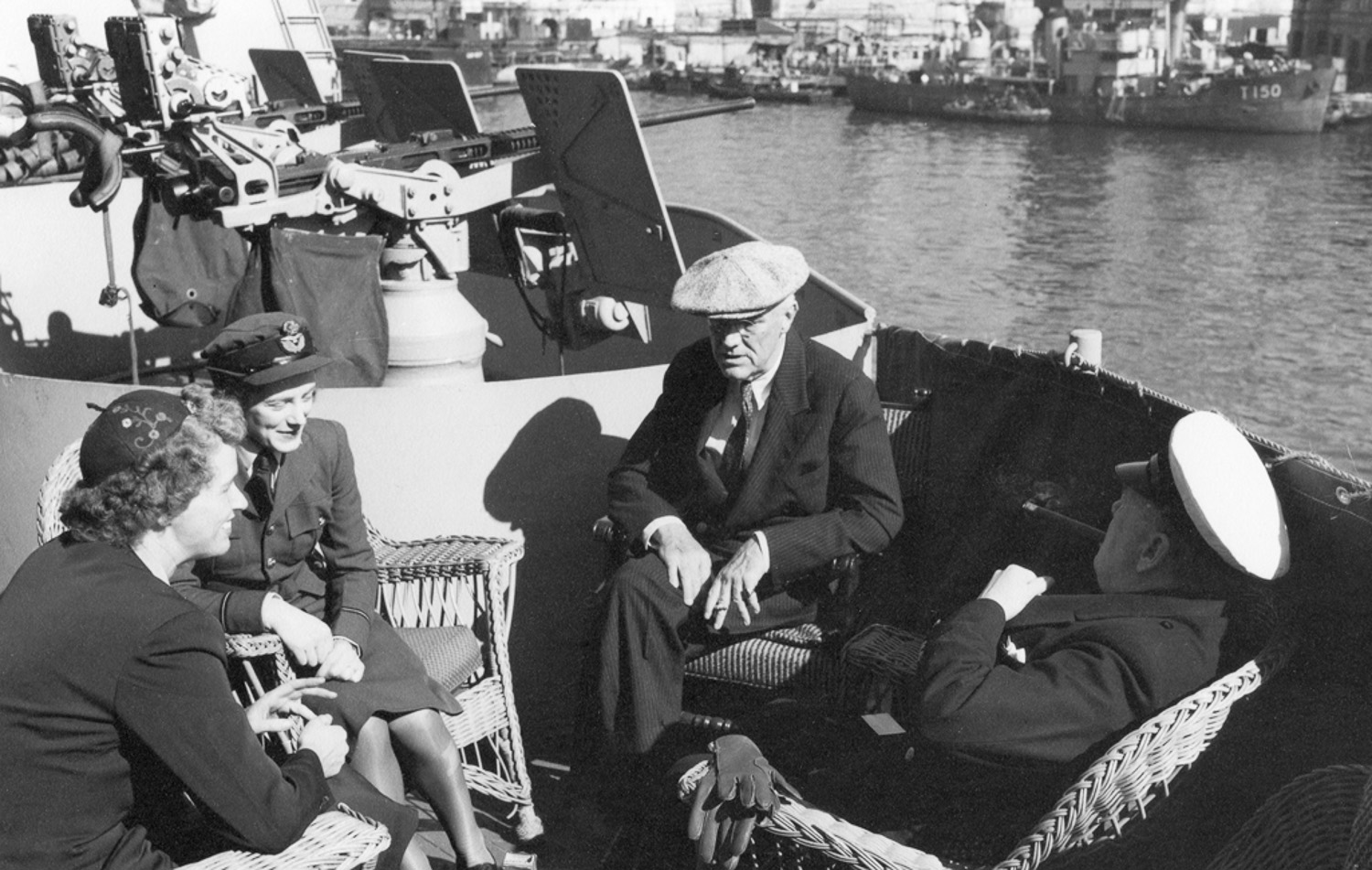 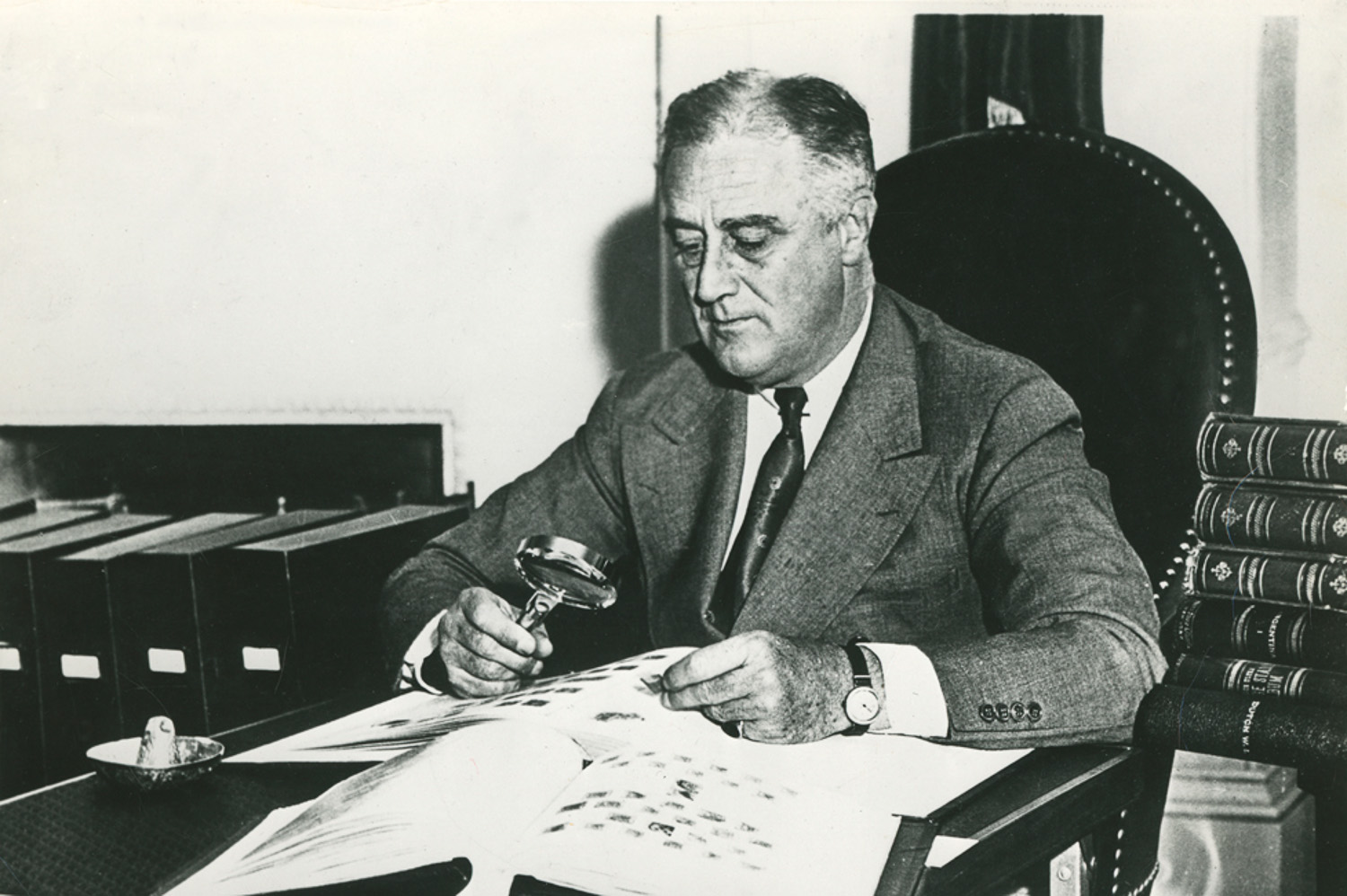 The Story Behind the Collection

After three decades working on budgets and administration for the University of California and serving under five presidents, Kirk O. Rowlands retired in 2009. After only three years of retirement, Mr. Rowlands passed away on July 9, 2012.

As an avid reader and book collector, Mr. Rowlands would note in his desk calendar trips to Black Oak Books to pick up the latest presidential biography. He was a collector, and his home in the Berkeley Hills proved this wherein he installed bookshelves lining every available alcove and wall. Over the years, he acquired several thousand hardback volumes, some written by friends and
acquaintances such as Flora Lewis, with whom he traveled by ship on a student exchange trip to Japan in 1940. Perhaps inspired by the notion of a gentleman's library that Thomas Jefferson once compiled for Robert Skipwith in Williamsburg in 1771, the collection was varied and extensive.

Most of his books, however, were histories chronicling foreign affairs, U.S. history and presidential politics, including nearly 800 volumes about Franklin Delano Roosevelt, his hero and the defining figure of his generation. In addition to collecting books and memorabilia honoring the nation's only four-term president, he greatly enjoyed trips to Hyde Park in New York, the Roosevelt memorial in Washington, D.C. and the USS Potomac, the presidential yacht docked at Jack London Square. He eagerly snapped photos of an FDR impersonator who sauntered about the decks of this "Floating White House" on bay cruises sponsored by the Potomac Association, of which he was a board member.

His family carried out his wishes when they donated his 800 volumes about FDR as one single collection to the CSUEB University Libraries. It is currently housed in the Concord Campus Library. 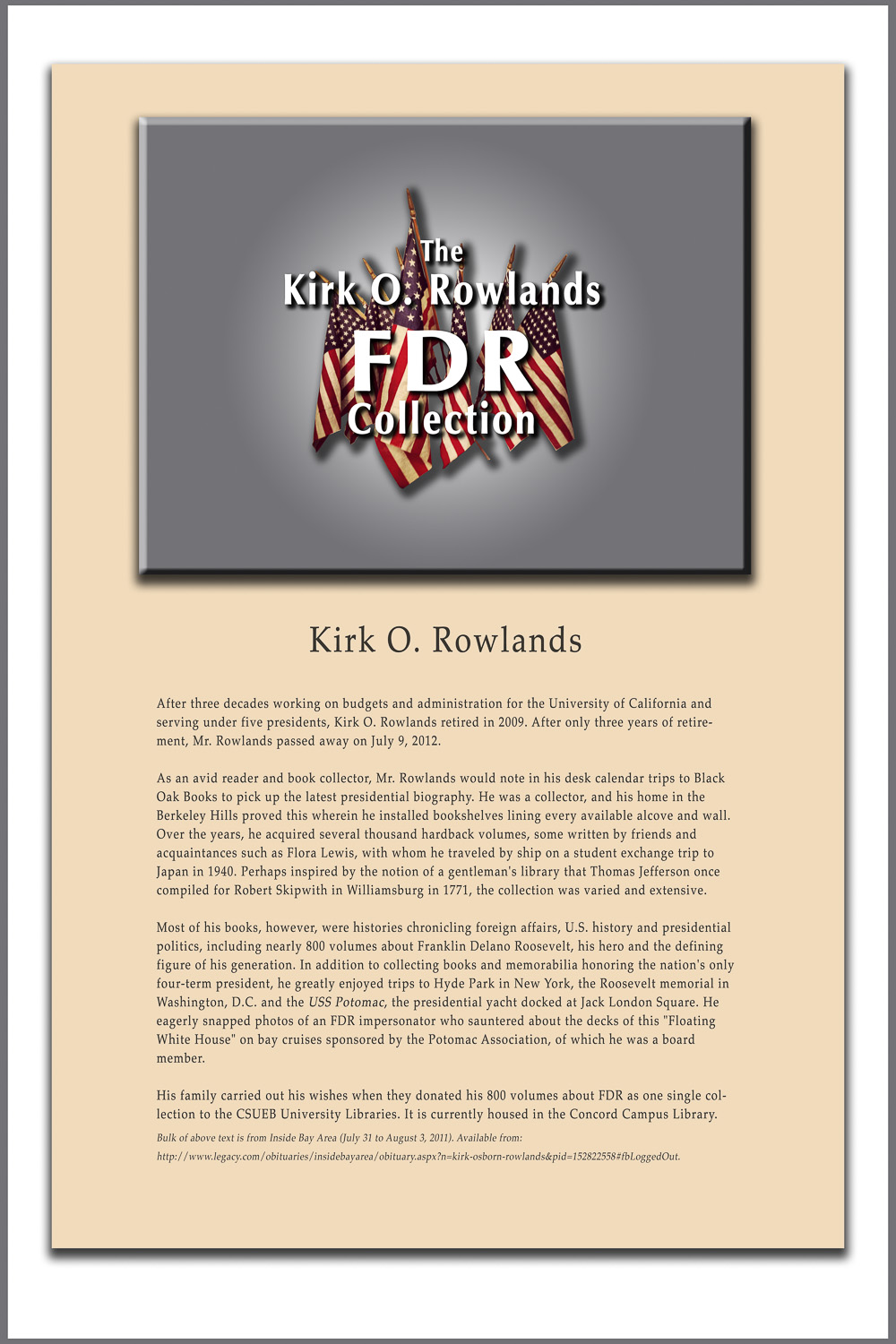 Wall Posters for This Exhibit

To read the Opening Day brochure, you can either right-click and read as an image file, or find full text elsewhere on this web page as indicated following: 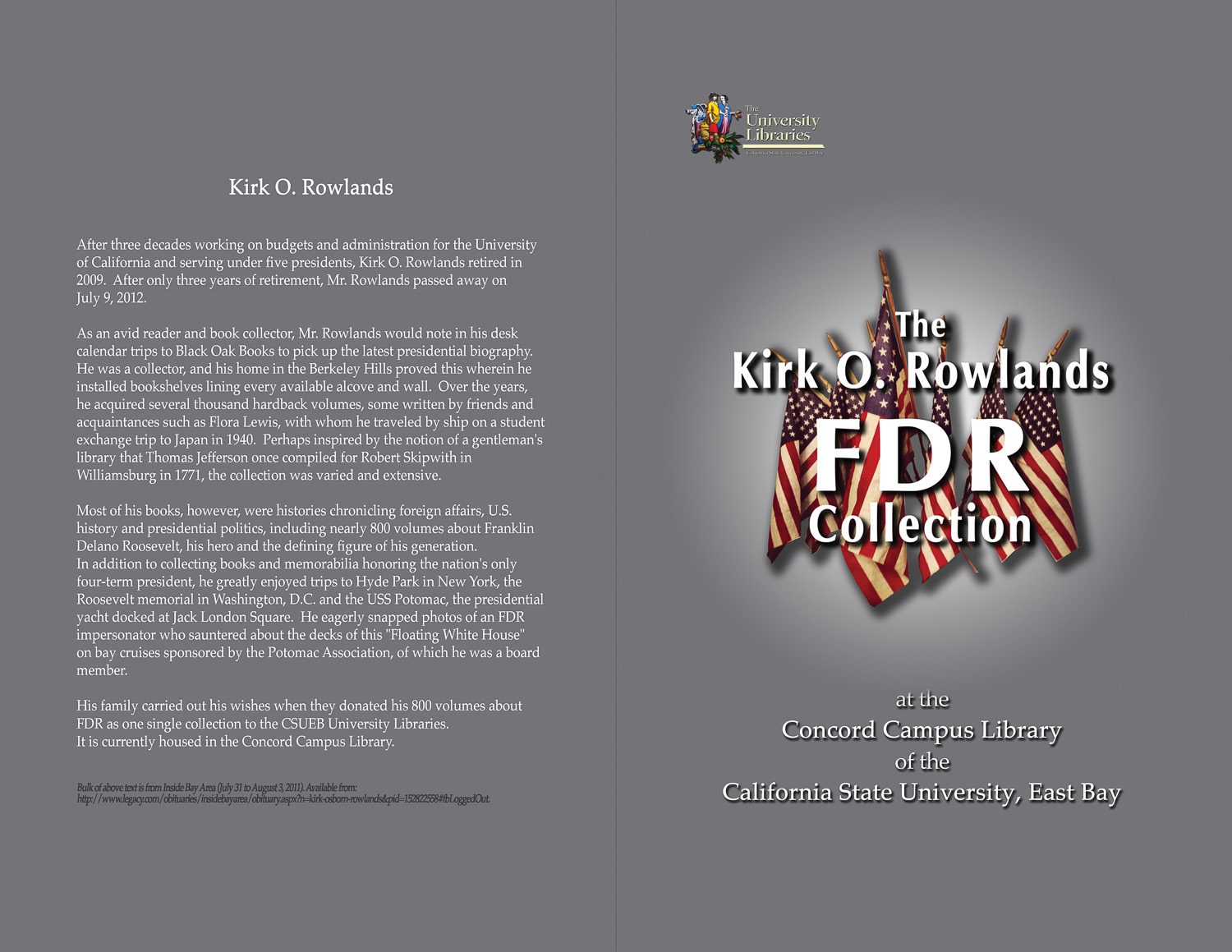 Page one: Full text of this brochure page occurs under "The Story Behind the Exhibit" elsewhere on this web page 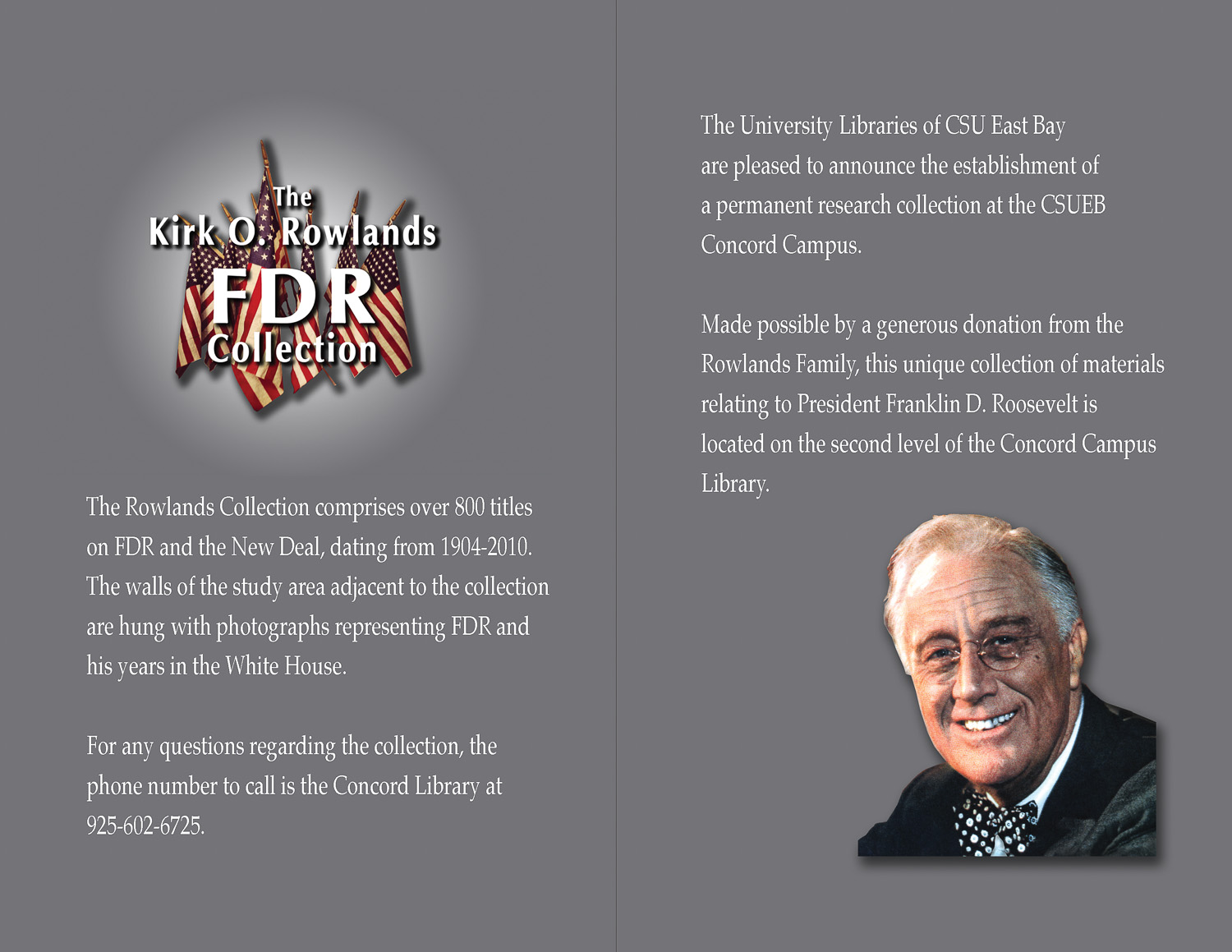 The Rowlands Collection comprises over 800 titles on FDR and the New Deal, dating from 1904-2010. The walls of the study area adjacent to the collection are hung with photographs representing FDR and his years in the White House.

For any questions regarding the collection, the phone number to call is the Concord Library at 925-602-6725.

The University Libraries of CSU East Bay are pleased to announce the establishment of a permanent research collection at the CSUEB Concord Campus.

Made possible by a generous donation from the Rowlands Family, this unique collection of materials relating to President Franklin D. Roosevelt is located on the second level of the Concord Campus Library.

Copyright 2012-15 by the CSUEB University Libraries

This wall exhibit of photographs from the life of president Franklin D. Roosevelt is currently on display at the CSUEB Concord Campus Library. These framed photos are wall-mounted in proximity to The Kirk O. Rowlands FDR Research Collection which was recently donated to the CSUEB Libraries.

For a more complete background of the Kirk O. Rowlands FDR Collection, click on the Exhibit Installation tab above.